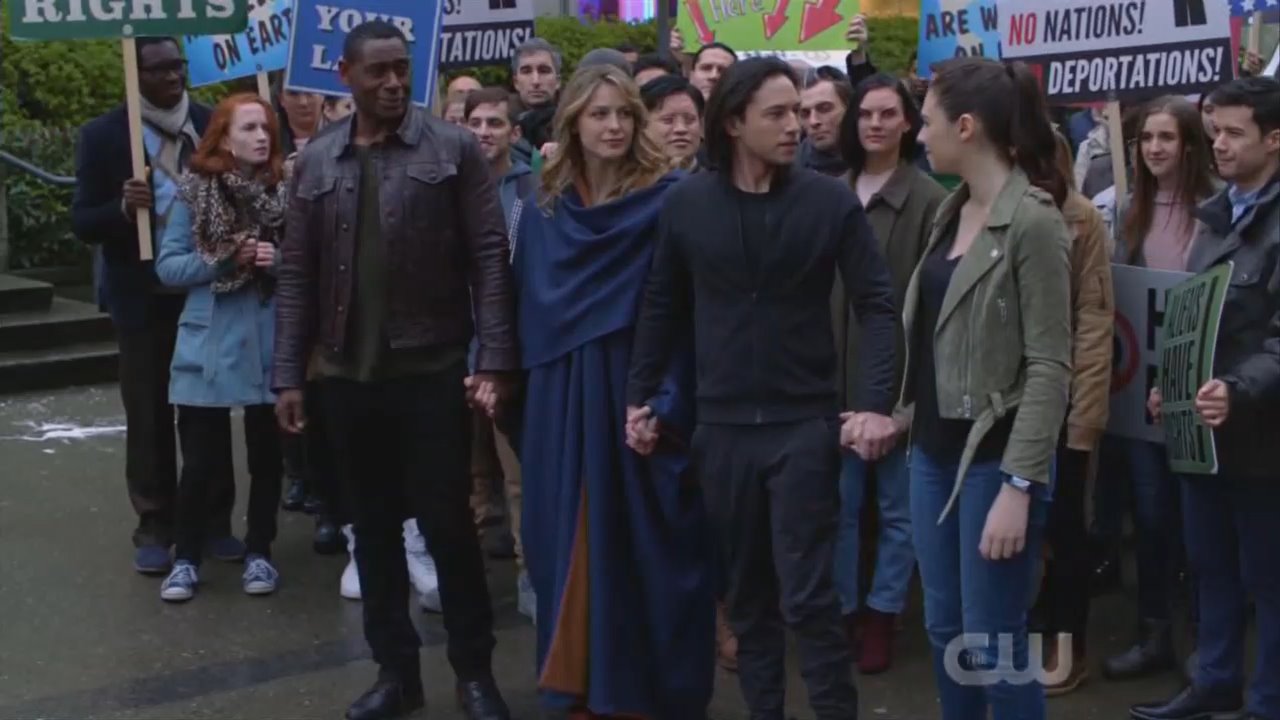 It was only a matter of time before CW’s Supergirl got back on its social justice soapbox. Taking a break from promoting gender transition, the comic-book series went a little old-school by outright protesting for alien amnesty again. They even give unmitigated praise towards journalism in the process. It’s truly an eye-rolling hour.

The March 10 episode “Stand and Deliver” follows the twist of Ben Lockwood (Sam Witwer), leader of the anti-alien Children of Liberty group, being promoted as a “Director of Alien Affairs” by the new sitting President. With this position, he reveals his plan to repeal the Alien Amnesty Act.

The Alien Amnesty Act, in case you don’t remember, was a piece of legislation introduced in season two that (and I’m not kidding) literally gave every alien who landed on Earth American citizenship. In the real world, anyone with a working brain would have issues with this law.

In the world of Supergirl, this makes Ben Lockwood and his followers no more than bigots. He scoffs at that notion saying, “Half of England said the same thing about Winston Churchill before World War II. So, I guess we'll just wait and see. History will prove me right.” (What do these writers have against Winston Churchill that they keep linking him to this season’s villain?)

The announcement from Lockwood about Alien Amnesty repeal leads inevitably to an alien counter-protest developing in the fictional National City. A comment is made about the amnesty march following the peaceful legacy of the Freedom March, the Million Man March, and the Women’s March. Of course, they neglect to address the glaring problem that Donald Trump isn't and never was president in this universe. Therefore, the Women’s March that arose in response to the 2016 election should not exist in this world, much less be complimented. But that’s beside the point for now.

The protest is mostly uneventful until hecklers begin crowding the aliens. It’s at this point that Supergirl (Melissa Benoist) stands up to the bigots who would dare question thousands of aliens with unknown motives coming into the country. As a bonus, eagle-eyed viewers will love the sign reading “No Borders, No Nations, No Deportations.”

Supergirl: We’ve got some hecklers on the south end, alongside the March.

Supergirl: What are you doing here?

Quentin: We're here to show our support for the repeal of Alien Amnesty.

Supergirl: But that amnesty is what gives these aliens their rights.

Quentin: Why should they get any rights? They're just here to hurt us.

Supergirl: They're not... Look at them. They're not here to hurt anyone. Most of them are fleeing war and violence, just like I did when I first came to Earth.

Supergirl: No, you're wrong. I am just like them.

Lockwood: Were you aware that these aliens intend to march on this rally today to quiet us, to silence you? Do they have the right to do that?

J’onn: Nice to have you with us.

Brainy: Thank you both.

Once again, Supergirl is so dense she seems to forget that aliens threatened to destroy the city three years in a row. It’s not bigoted to be afraid of god-like beings who want you dead or enslaved. Furthermore, the show is also incapable of showing any good argument from the opposite side. I’ve yet to see one person who disagrees with Supergirl politically that isn’t portrayed as evil or just plain wrong. Judging from their portrayal of protesters, I doubt the writers even think they exist.

If you think that the episode is already too self-righteous, just wait. CatCo Media editor James Olsen (Mechad Brooks) must handle the coverage of the rally and the counter-protest. This march makes his new alien reporter nervous, but James comforts him by reminding him of the “heroic” merits of journalism.

Franklin: Mom, the march will be safe. I love you, too. Bye.

James: Nervous about covering the march?

James: No, it's okay if you are, Franklin. I mean, we are living in crazy times, right? It's just important to remember what we do here every day. Reporting on events like this, taking the risk to show all sides, and showing the humanity there, that's nothing less than heroic. I mean, think about it. You fight injustice with your fists, you can help one, maybe a dozen people. But good journalism, that can impact millions. It's why we became journalists in the first place, right?

The praise of journalism continues as James takes photos of the rally and protesters clashing. Although there is violence, he manages to capture images of aliens and humans inexplicably helping each other in solidarity. His photos of the event are apparently so inspirational that Kara, Supergirl’s alter-ego, remarks to James that she heard that people are volunteering at an “alien outreach center.” Even better, Lockwood admits he will wait for congressional hearings before enforcing a repeal. The protest was clearly a success.

It’s so annoying that Supergirl acts like its storyline and journalism are apparently single-handedly stopping bigotry. The only bigotry I see is assuming everyone on the opposite side are angry, hateful jerks. Maybe Supergirl isn’t above this, but most of America should be.