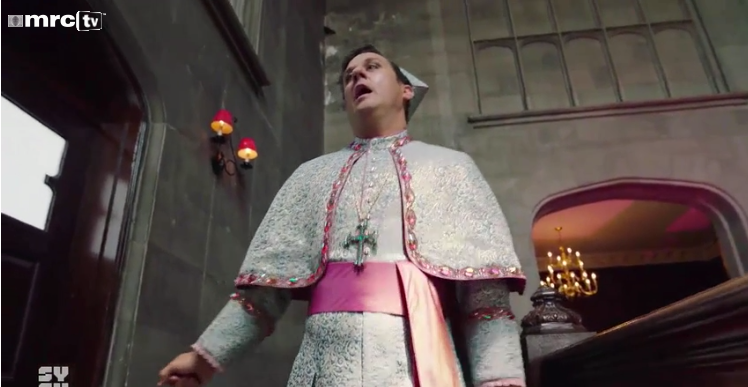 From the season premiere alone, Syfy’s Happy! is, looking to be one big violent, tasteless, abhorrent mess this year. Based on a limited-run comic series, the show is charting new territory in its second season, and by the look of things, it isn’t pretty. It even just might rival Preacher in hating Christianity.

The March 27 premiere title “The War on Easter” should tell you all you need to know. Nick Sax (Christopher Meloni) is a former cop and hitman who last season successfully rescued his estranged daughter Hailey (Bryce Lorenzo) with the help of her imaginary friend, an animated winged horse named Happy (Patton Oswalt). Now he attempts to better improve his life for Hailey’s sake. However, that’s quickly derailed when children’s TV entertainer and secret crime lord “Sonny Shine” (Christopher Fitzgerald) develops a new disturbing holiday-themed scheme. Considering his Christmas scheme to kidnap children, including Hailey, backfired, now he's back with an Easter one.

Within the first minute alone, we’re treated to the bizarre image of nuns in suicide vests self-destructing near an Easter festival. What purpose does this violent and probably sacrilegious image serve? Apparently, it’s part of a new scheme that Sonny proposes in front of the literal Pope to, I kid you not, “Make Easter Great Again.” The scene just makes you want to vomit up a chocolate bunny.

Points for the show recognizing that Easter is the resurrection of our Lord and Savior Jesus Christ. That just makes it all the worse for the garbage that follows. There’s the flamboyant bedazzled TV host attempting to “re-brand” a religious holiday. There’s him labeling Easter as the “Alzheimer’s ravaged mother-in-law of holidays,” despite the fact that hundreds of millions of people recognize it as a holy day worldwide. There’s Sonny casually throwing in a “MAGA” reference just because he’s a bad guy and that’s what they do, apparently. Worst of all, there’s the Pope actually agreeing to this at the end of the scene.

With that unfortunate development, we can only expect things to get worse on this plot. In fact, these incredibly repugnant anti-Christian thoughts are shared by the series creator and original comic artist Grant Morrison. In an interview regarding the new season, Morrison describes Easter as “a kind of lame-ass holiday, the one no one cares about” that needed revitalizing for his new season. And he’s in charge of the whole show.

I can’t expect too much decency from a show that seems steps away from crossing into nudity (the one thing that’s censored), but the least they could do is leave the Church out of it. It’s times like this that make me wish the only thing we had to deal with on this show was blood and unnecessary swearing.

Sadly, we still get an unhealthy amount of both when Nick eventually runs into trouble in a seedy part of town. A shady group attempts to harvest a woman's organs until Nick interrupts them. After some missteps, Nick gets himself out of that mess by making a new one - literally. He stabs one guy in the gut with a forklift and watches him bleed like a geyser all over the floor. Then he flattens another man with another vehicle and hangs his last perp on a chain. When everything is done, he takes the remains of a kidney to sell on the black market. Syfy is no stranger when it comes to graphic violence, but that doesn’t make this any less unsettling.

While I’m thankful this isn’t on any primetime network, the fact that Happy! exists at all is disgusting. It seems to have taken the first season as a springboard to get even worse. For the record, I am not happy, and neither should you be.