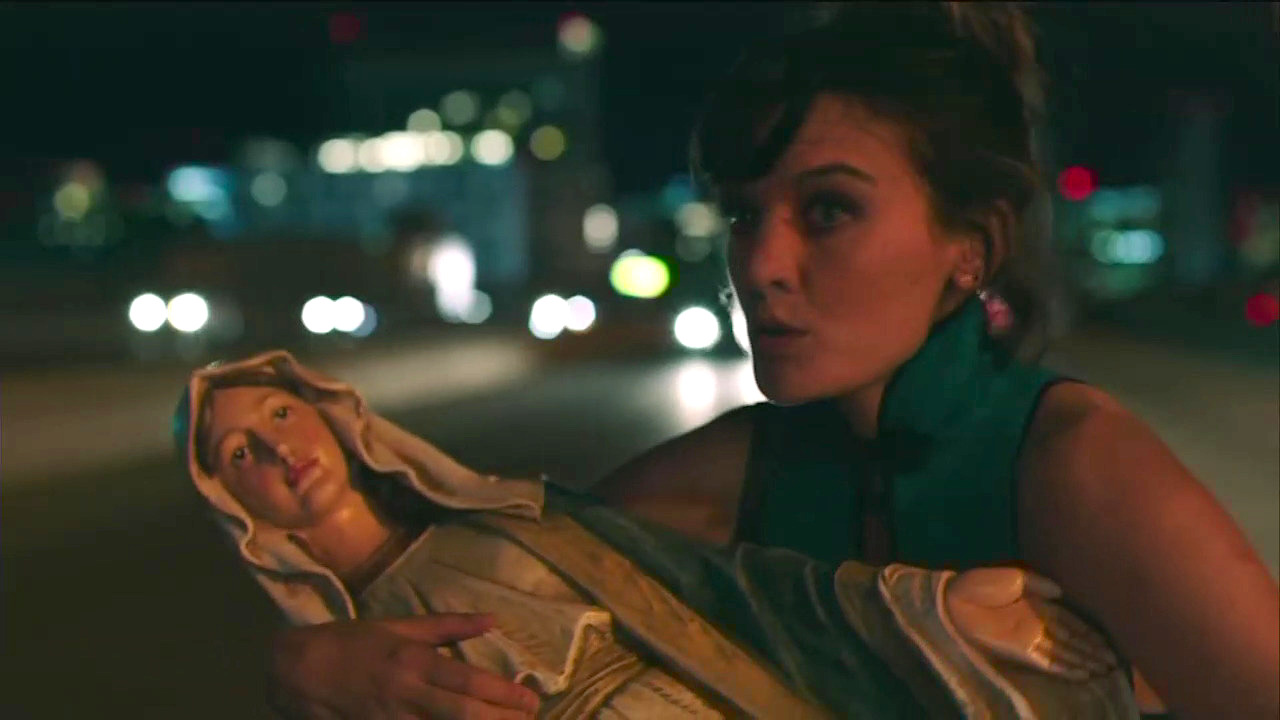 Despite terrible storylines and a notable, real-life #MeToo-type scandal, Showtime’s SMILF has somehow returned for a second season. In an effort to prove how grossly insane that decision was, the latest episode goes full throttle with the disgusting and sacrilegious “humor.” Sadly, last week's fairly tame season two premiere seems to have only been a fluke.

The January 27 episode “Sorry Mary, I’m Losing Faith” literally begins with Bridgette (Frankie Shaw) fantasizing about a man dressed as Harvey Weinstein in a bathtub. I wish I was making that statement up, but we’re all subjected to that gross image. Following her sexually abusive father's unexpected death in the season premiere, she apparently dreams about having sex with "Weinstein" all while pondering her moves for the future. For the record, Bridgette does consider this an unhealthy habit, but that doesn’t make it any more pleasant for the rest of us to watch.

Bridgette: I shouldn’t have called you.

Harvey: I could really use a massage.

Bridgette: We need to stop doing this.

Harvey: Just a little rub, and don't ruin your friendship with me. It could really help your career. I mean, I mean, you know—

Bridgette: My dad died. I need to move on from this perverted shit.

Bridgette: I don't know why I even care.

Bridgette: He was gross. A true pervert.

Harvey: Too bad we never met.

Bridgette: You kind of remind me of him. I gotta move on. I gotta find a nice boy and settle down. That's what I should do. Okay?

Bridgette: Oh, God, I started playing basketball because he loved the Celtics.

Bridgette: He would've thought so too.

Harvey: I mean, I mean, I could negotiate a better hotel room. It's for the best. You wanna be famous, hmm? Couple of phone calls, that's all it takes.

Bridgette: You have been saying that for years, and look where I am. I'm much, much worse off.

Harvey: Come on, one last time.

Harvey: I'll keep my robe on.

This is also coming from the show that recently received charges for harassment and labor violations in December. Star and showrunner Frankie Shaw herself allegedly coerced an actress into performing a sex scene she was uncomfortable with despite a previously established no-nudity clause in her contract. Even if she was later released from the charges, it seems like the last thing this series should touch upon are people who use their power to force others to perform sex acts.

Following that bizarre sequence, Bridgette attempts to go on a date with a tattoo artist but struggles to find a sitter for her toddler son. She eventually finds help from her boss Ally’s (Connie Britton) employees in exchange for a dinner later that night before her date. The night sadly ends with Ally firing Bridgette, putting Bridgette and her son’s future into question. This is where the episode somehow gets worse.

Feeling dismayed, Bridgette ditches her date to wander the streets and comes across an open church. Being the openly anti-religious person that she is, Bridgette uses her first moment alone in a church to shout “Abortion!” at the top of her lungs. Take a look.

Then she breaks into the Holy Eucharist and steals the wine for herself to drink. After that less-than-classy move, she has a conversation with a Mary statue on her failing life, bemoaning the fact that the Virgin Mary didn’t even get to have sex before becoming a mom. Don't forget that last season Bridgette said Mary was raped by the Apostles and "forced" to give birth to Jesus.

Bridgette: I thought I was gonna be so good. You know? I was gonna move to New York... Or L.A., even. Just get out of here. I'm really worried about the future for my kid. My future, too, I guess. Is this what praying feels like? I kind of like it. You know, you really got the short end of the stick. You know that, right? You had to be a mom, and you didn't even get to have sex. I mean, what do I know? It's not like I'm reading your diaries. It's not like you wrote any diaries. Someone else wrote your diary. [Whispering] Someone else wrote your diary. That is so fucked up. Do you even wanna be up here? I can get you out. You wanna go home? They really got you-- got you on pretty tight, huh. Oh! Okay, let's go. Come on. We're free! Waze always fucks you. [Horn honking] Oh, shit. A very, very bad idea. Oh. Are you okay? Jesus. It's okay. I'll fix you right up. Fix you. Let me just text Rafi.

She really does steal the statue as the episode ends with her in a car with her baby daddy Rafi (Miguel Gomez) and Mary in the back. We finally finish thirty minutes, and we’re all a little worse off because of them.

As seen by the last season, the show clearly has major hang-ups against Christianity and religion as a whole. When the “comedy” isn’t focused on how pathetic the characters are, it usually finds some slam to make against Jesus, Mary, or the Church. Considering this episode is described as Bridgette’s “religious rediscovery,” we should probably just be thankful she only stole the statue instead of beheading it.

Either way you slice it, it’s still a scene openly deriding a symbol of faith for billions of people all for the sake of a cheap laugh. In 2019, this isn’t even unique anymore. Nowadays, we have journalists willing to do that job on Twitter. Perhaps if one of them would support Christianity or try mocking Islam then we could at least have more original material.

SMILF was an unbearable, unfunny dirge against Christians and decency in its first season. Judging from this episode, it won’t be changing anytime soon.