CBS’s fictional salute to Hillary Clinton, Madam Secretary, has finally achieved its ultimate dream. After four seasons, the new season premiere features a lofty appearance from the former Secretary of State and failed two-time presidential nominee herself. Even better, she advises our lead on how to handle white nationalist terrorists. 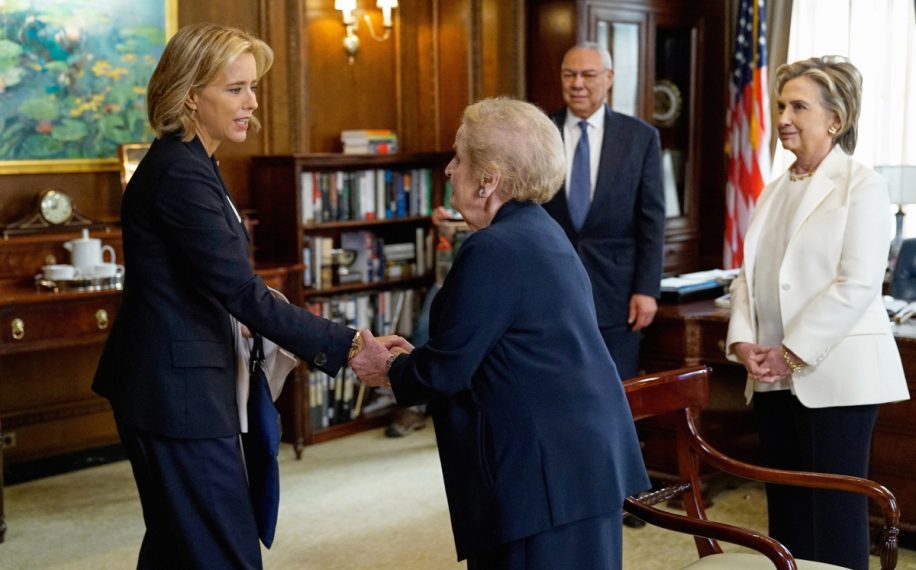 The October 7 episode “E Pluribus Unum” follows an attack on the White House right as Secretary of State Elizabeth McCord (Téa Leoni) attempts to procure a nuclear disarmament deal between India and Pakistan. Before the talks even begin, the India Prime Minister and Foreign Minister are apprehensive over working with the United States as “a country that has repeatedly subjected us to barbaric terrorist attacks and endless wars” with a “despicable record on human rights and racism.” Elizabeth and her CIA Special Activities Division head, husband Henry (Tim Daly), for their part, don’t disagree with that description. Some American representatives they’re turning out to be.

Unfortunately, that agreement is cut short when an RPG is fired at the White House, harming several aides, including Elizabeth’s daughter Stevie (Wallis Currie-Ward). The culprit behind this turns out to be a white nationalist group known as the Aryan Popular Force. Apparently, discussions with India and Pakistan as well as a recent immigration bill pushed them over the edge. How a previously unheard-of group found a destructive weapon is not discussed, but Elizabeth has bigger problems. She must reassure the nation now gripped by terror and keep her potential presidential run alive.

For some personal advice, she turns to former Secretaries of States including Colin Powell, Madeleine Albright, and, of course, Hillary Clinton. Try to listen to these supposedly wise words without rolling your eyes.

Hillary Clinton: They attacked what has made America great, uh-- and still does-- and that is our diversity. I mean, look at, look at us.

Colin Powell: The attackers wanted to destroy that. To divide us.

Hillary Clinton: So, you know, Elizabeth, I think what we're all saying is talk about what unites us. Even at this moment of peril, remind Americans of our nation's original motto, something that I think about a lot and which seems more important today than ever: E Pluribus Unum. (Chuckles softly) Out of many, one.

Madeleine Albright: Hillary, you're so right. Because we all, unified, depend on each other.

Elizabeth: All of us.

So I suppose Elizabeth should strive to “make America great again”? Even scripted, those probably weren’t the best choice of words.

Of course, this wasn’t Hillary Clinton’s first network appearance this year. Just a few weeks ago, the not-president also made an appearance on the premiere of Murphy Brown as a prospective secretary. Although they’re both different genres, these appearances generally accomplish the same goal. It’s another case of propping up a Democrat figure who couldn’t be more irrelevant at this point.

Most importantly, this show also proved exactly how tone-deaf the left has become. They preach tolerance while totally demeaning the other political side. They prop up a racist boogeyman while left-leaning affiliates attack and threaten innocent people. They somehow claim to want to represent all Americans yet trot out Hillary Clinton as a spokesperson. Elizabeth even quotes Hillary at the end of the episode on the nation’s motto “E Pluribus Unum.” At least Elizabeth doesn’t call her opponents “deplorable.”

Still, it’s a great day to remember that Hillary Clinton is still not our president, no matter how many chances she gets on TV.