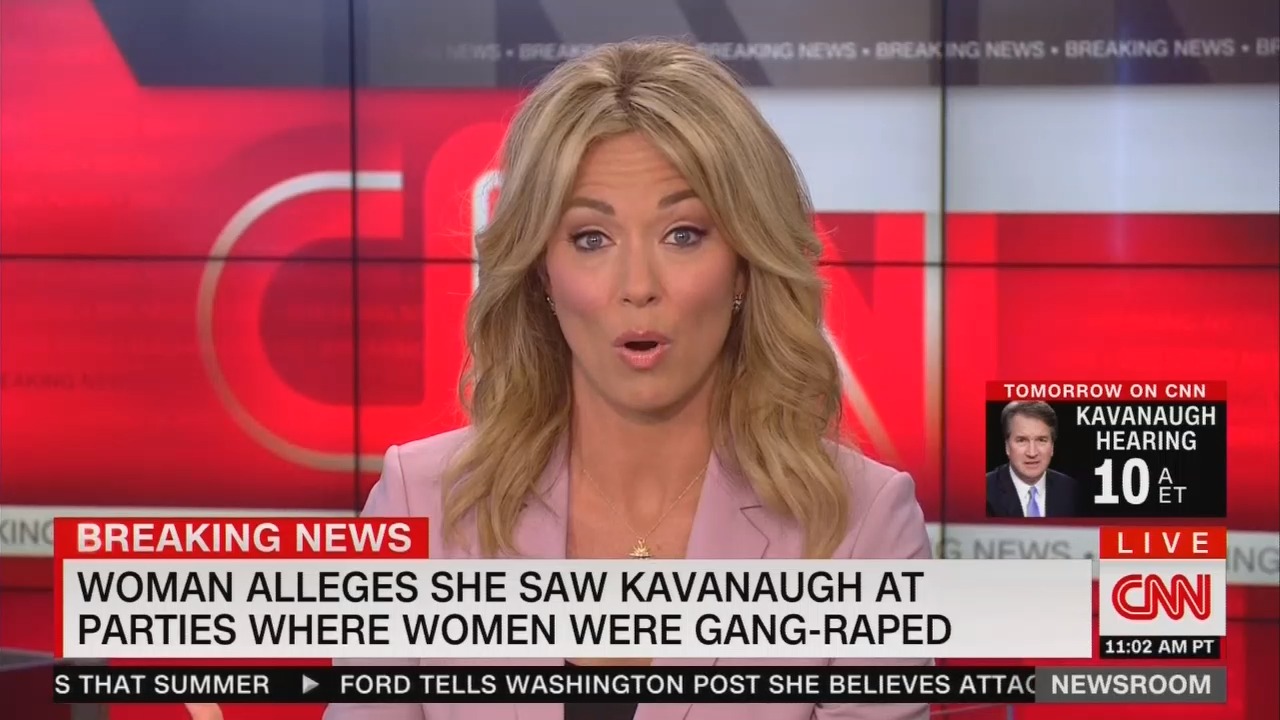 During the past three weeks, Supreme Court nominee Brett Kavanaugh has received a deluge of news coverage accusing him of vile crimes, including attempted rape and even organizing gang rapes. Though these charges did not originate with the news media, the lack of satisfactory corroborating evidence should have caused ethical reporters to refrain from gratuitously repeating allegations that painted Kavanaugh in a monstrous light.

The media have shown no such restraint. Take CNN as a case in point. MRC analysts reviewed all of the network’s Kavanaugh coverage during an 18-day period from September 16 through October 3 and found CNN’s on-air anchors, reporters and contributors associated Kavanaugh with the word “rape” 191 times, or more than ten times per day. Note that this does not include the many other instances in which the word was used by guests, or by participants at live or replayed news events (such as the hearing on September 27). This count also excluded milder synonyms, such as “sexual assault.”

Nearly 20 years ago, Juanita Broaddrick accused then-President Bill Clinton of raping her while he was the Attorney General of Arkansas — reportedly leaving her with a bloody lip and the words, “You’d better put some ice on that.” In the 18 days which followed Broaddrick’s story appearing in the Wall Street Journal (February 19, 1999), a Nexis search found CNN’s on-air personalities (also excluding guests) only talked about Clinton as an alleged “rapist” 34 times, and then mostly on talk shows like CNN & Company (12 times) and Larry King Live (9 times). That’s less than one-fifth the rate at which CNN today have tarred Brett Kavanaugh with the same devastating label.

The caution with which CNN approached Broaddrick’s claims back then makes their handling of the Kavanaugh controversy appear all the more punishing.

But a mere two hours later, Berman claimed that any Senator who voted to confirm Kavanaugh would be doing so, “knowing that woman stood before the Senate, accusing this nominee of rape.”

Hour after hour, the likes of Alisyn Camerota (New Day), Anderson Cooper (Anderson Cooper 360), and Don Lemon (CNN Tonight) performed laborious readings of Ford’s opening statement on their shows. These were supplemented with clips of Ford reading the statement herself, as well as a videotape in which CNN International correspondent Sarah Sidner summarized the document.

The following passage in particular was given considerable airtime: “I believed he was going to rape me. I tried to yell for help. When I did, Brett put his hand over my mouth to stop me from screaming.”

Other CNN journalists struggled to summarize the allegations by Julie Swetnick (a client of Michael Avenatti’s) without using suggestive and ambiguous language. On October 1, CNN White House correspondent Kaitlin Collins described Swetnick as “the woman who said that she attended parties where there were gang rapes and excessive drinking and aggressive behavior from Brett Kavanaugh.”

Some talking heads eventually abandoned terms such as “alleged,” and “accused,” in their analysis. For example, CNN chief political analyst Jeffrey Toobin on October 2 offered the following take on The Situation Room: “[Trump’s] hypothesis is, ‘Well, my Supreme Court nominee may be an attempted rapist, but on the bright side, my Deputy Attorney General thinks I’m too insane to be President.’”

Back during the Clinton Presidency, CNN’s reporters and anchors almost always softened the term to “sexual assault,” as when anchor Judy Woodruff set up a segment on the March 1, 1999 edition of Inside Politics: “While the President has been on the road, the sexual assault allegations made against him by Juanita Broaddrick have been fodder for political talk shows...”

That’s still tougher language than when UPI’s Helen Thomas became the first reporter to confront Clinton at a February 24, 1999 press conference, when she avoided any real description of the charge: “What is your reaction to recent allegations by an Arkansas woman, apparently of something she claims happened many years ago?”

Appearing on CNN’s Moneyline later that same day, then-Washington Post media reporter Howard Kurtz gave a nonpartisan explanation of why the media were so reluctant to discuss Broaddrick’s charge:

Because it’s sort of like dropping a nuclear bomb to make this kind of charge against the President. It’s a 21-year-old charge. There are no medical records, no hotel records. There are no police records. And so you want to very carefully assess the credibility of the woman making this charge, and that makes news organizations nervous.

Kurtz was incorrect; in fact, as NBC's Dateline would report later that night, there were hotel records putting Broaddrick in Little Rock the night of their alleged encounter, giving her story more corroboration than Ford's accusations against Kavanaugh. Yet there's been no evidence that CNN has been at all "nervous" about endlessly regurgitating the harshest allegations against the Supreme Court nominee, even if none of them can be independently confirmed.

In May 1987, after a jury found him innocent of all charges brought by New York City prosecutors, former Secretary of Labor Ray Donovan famously asked, “Which office do I go to to get my reputation back?” Whether or not he is seated as a Supreme Court Justice next week, Brett Kavanaugh could justifiably ask the same question of the reporters who have battered his reputation by endlessly repeating damaging, and totally unproved, allegations.