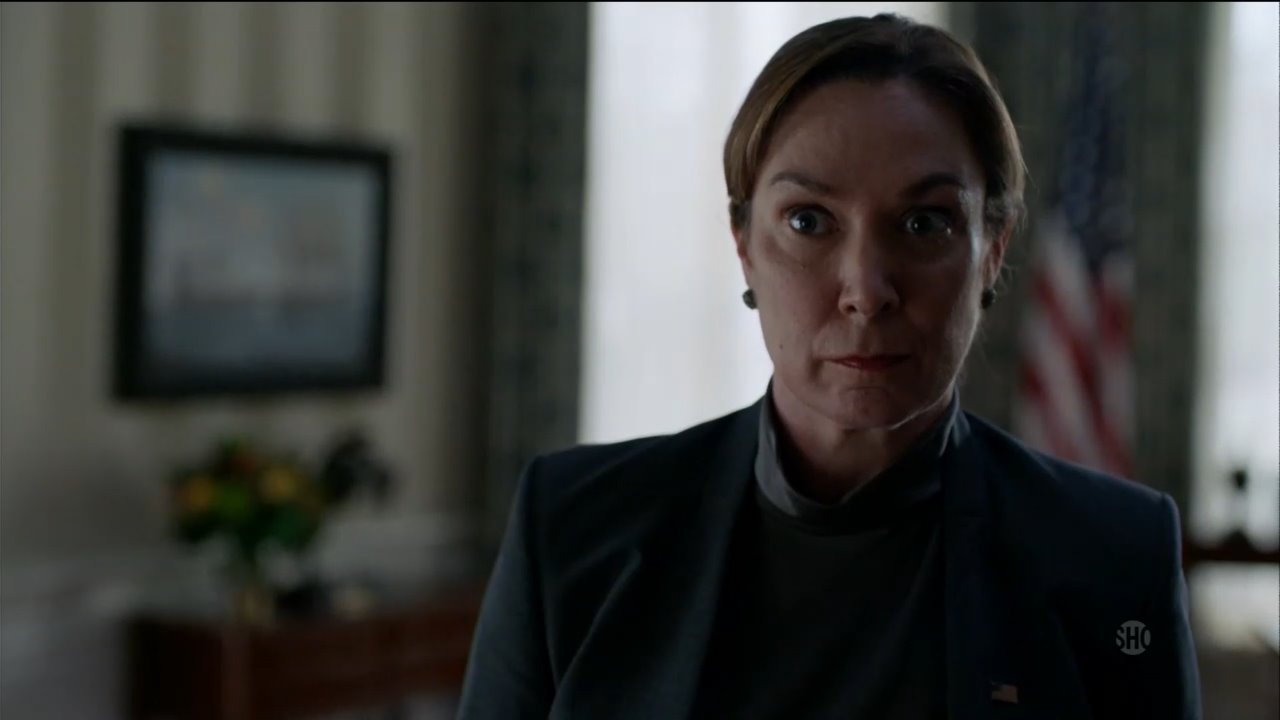 Last week, Showtime’s Homeland kicked off what turned out to be a string of fictional plot lines involving the impeachment or removal of the President of the United States (Sunday's The Good Wife even talked about assassination). Now the April 22 episode "All In" turns all that talk into action when they officially "remove a President so despised, her own Cabinet lined up to get rid of her." I’m sure the left wing is getting chills just hearing about such a prospect happening.

Carrie (Claire Danes), Saul (Mandy Patinkin), and their own makeshift team travel to Moscow on a classified mission from President Keane (Elizabeth Marvel) to secure a significant witness in a political conspiracy against her administration. Unfortunately for them, the plan hits a huge snag when Keane’s Vice President Warner (Beau Bridges) officially ousts her from the presidency after the Supreme Court rules that the delivery of her Cabinet termination notices from the last episode was not sufficient enough to properly fire the members. Therefore, all the Cabinet members planning to vote for her removal retain their positions and use their power accordingly.

As of now, through the 25th Amendment, Keane is no longer president and removed from office.

Keane: What is it? It's okay, Ashley. Thank you. Not wasting any time.

Warner: So you heard the Court's decision.

Keane: Yeah. Delivery issues with the pink slips. Not enough stamps, I guess. This is a moment that was never meant to happen. You know that, right? A moment utterly not contemplated in the Constitution. Everyone keeps waiting around like they actually care what it says.

Warner: I do care what the Constitution says.

Keane: Good. Then explain to me how you used the 25th Amendment to oust a President who is not in a coma, not in any way disabled, clearly in possession of her faculties, clearly able to discharge the duties of her office. How is that done?

Warner: Madam President, I am here to relieve you of your command.

And just like that, Homeland ironically portrays the liberal fantasy of removing a president from office ... with the character they had wanted to base on Hillary Clinton.

Despite being portrayed as "paranoid" and "fascist" at the beginning of the season, Keane receives some sympathy as it is revealed she is clearly the subject of a Russian conspiracy; first with the fake news spread to make her look bad, and now with the help of unwitting or scheming politicians and Cabinet members disrupting the government for them. In an impressive feat, the writers manage to have the catharsis of seeing a president taken down while still bemoaning how this Hillary Clinton stand-in is the ultimate victim. Everybody wins - that is, if you’re a liberal.

Back in reality, we still have to endure the complete lack of evidence regarding any Russian-Trump conspiracy and the endless hole of excuses for why Hillary lost. At times, it can be insufferable, but it is far better than this imaginary alternative.