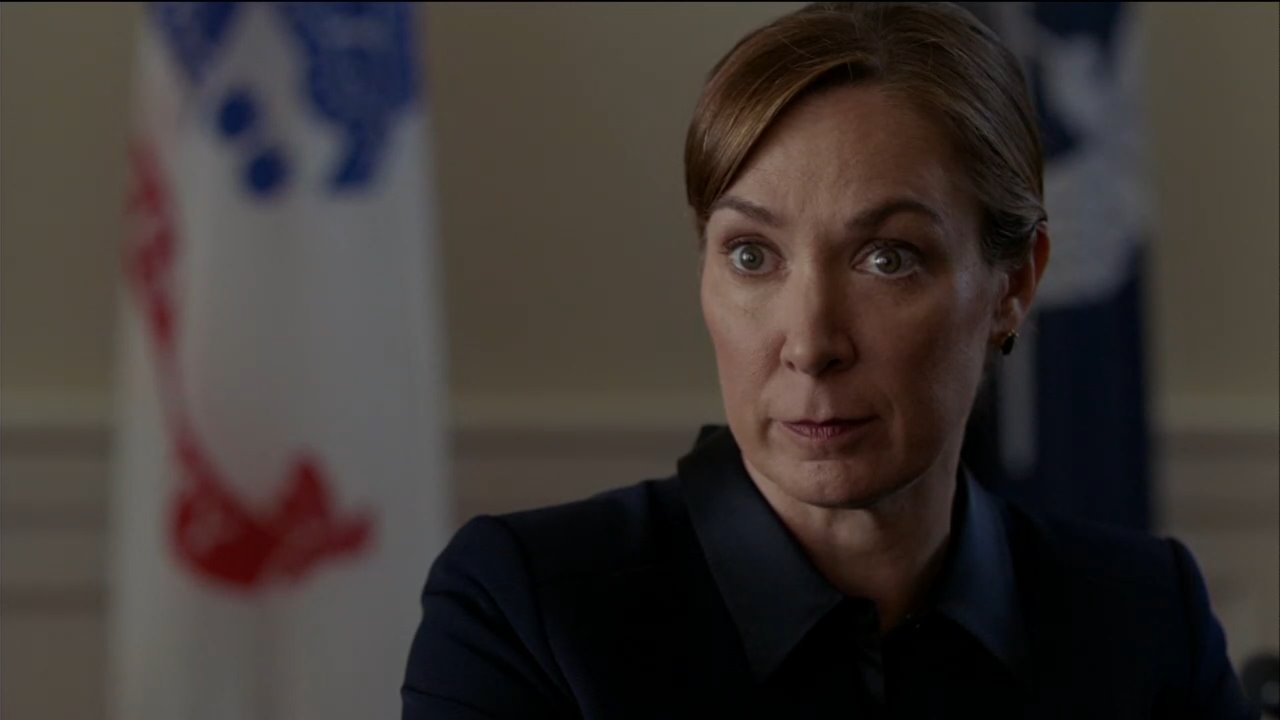 While the the liberal media lauds fascist dictators at the Winter Olympics, liberal Hollywood lectures us (with a wink and a nod) about fascist presidents on Showtime’s Homeland.

The February 11 season premiere “Enemy of the State” continues after the shocking season six finale when President Elizabeth Keane (Elizabeth Marvel) ordered the sudden arrest and detainment of 200 intelligence officers for allegedly being connected to her attempted assassination.

Despite the attempted parallels to Hillary Clinton from the previous season, the show now seems determined to portray Keane as the paranoid, tyrannical figure that liberals imagine Trump is. Observe how she behaves upon being questioned for suggesting a former general be executed.

Wellington: Well, I’m not sure going after him directly was the best move.

Keane: He openly challenged me. What was I supposed to do?

Wellington: Well, you might've stuck to the script.

Keane: I had to respond.

Wellington: Senator Paley was on CNB this morning, calling your leadership style "thuggish" and "authoritarian." No one's doubting how tough you are.

Wellington: Which makes it exactly the right time to throttle back a little, take your foot off the gas.

Keane: I said not yet.

Wellington: Can I give you a quick brief?

Wellington: Paley's Committee is about to issue its first round of subpoenas to senior White House staff, including myself.

Keane: I know that, David.

Keane: I know that, too. How is it they tried to assassinate me, and I am the one under investigation?

Wellington: Because we locked up over 200 of their best friends and neighbors.

Wellington: Kept them for nearly two months. Some would say denied their civil rights.

Keane: That was the other reason -- send a message. "Don't fuck with us ever again."

Wellington: Yeah, well, I think they got that loud and clear.

Keane: Well, we'll see. Won't we? When the jury comes back with the appropriate sentence.

As it stands now, former White House advisor Carrie Mathison (Claire Danes) is secretly working against the president to secure the officers’ release and restore order to the paranoid administration. (Looks like the first female president wasn’t the end-all, be-all solution they hoped it would be here, either.)

And who should profit from the chaos of possible tyranny but Alex Jones-copy Brett O’Keefe (Jake Weber)? Running from arrest, the man still manages to push his propaganda and be a continuous misogynist thorn in the administration's side as a member of the "resistance."

O’Keefe: Wow, that was cutting it close. I didn't think we were actually gonna make it to camera there for a minute. Praise the Lord. This is Brett O'Keefe. Welcome to day 52 of the Resistance. You know, you learn a lot over the years running a major media organization. And the one thing that I've learned is when the government pushes back on something, and pushes back hard, a lot of times it's because you're hittin' too close to home. No coincidence, then, the warrant for my arrest came the day after I broke the news here on real truth that the attempt on the President's life was a hoax, an inside job staged to boost her approval ratings and justify a tyrannical purge of her enemies.

Just this morning, my sources tell me, she was at the Washington Navy Yard in a rage, calling for General Jamie McClendon to be put up against a wall and shot! I'm not kidding. Bring back the firing squad! Now to those who would try and excuse this behavior or blame it on hormones, I say this -- yes, it's true, Elizabeth Keane's in menopause. I've seen the medical records. But this isn't about hot flashes, my friends. This is a ruthless political machine hell-bent on stealin' the country right out from under our noses.

Unfortunately, it looks like O'Keefe will be sticking around along with this administration plot, not that the show cares to make him anything more than a bad caricature. He and Carrie are now technically on the same side with both considering Keane a fascist and trying to stop her. With the drastic shift we’ve seen since last season, it’s hard to tell if I should root for anyone anymore.

Prior to the premiere, Homeland showrunner Alex Gansa commented on the plot as it relates to our current administration. He remarked, “I think [Trump] might be amused just to watch an administration convinced that there was something called the ‘deep state’ aligned against her. Clearly that’s a fear that the Trump administration feels every day.”

For the show’s part, Gansa emphasizes that “Keane is not Trump and Trump is not Keane.” However, Trump is still clearly an influence in the season, as he notes, “I don’t believe we’d be telling the story in Washington, D.C., if Hillary Clinton had been elected president.” Any and all political chaos must now surely relate in some way to the Trump administration.

Much like Madam Secretary earlier this year, Homeland is hopelessly attempting to draw real life parallels with a fictional fascist president given Trump-like qualities. The problem is, this isn’t real life. This isn’t even close to real life. No matter how much people may hate Donald Trump, they must admit that someday.