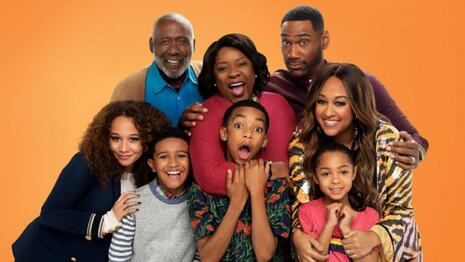 Netflix’s Family Reunion third season began streaming on April 5. The eight-part series of half-hour episodes follows the daily life of the McKellans, a multi-generational black family living under one roof in Georgia. The hot button issue of white privilege was randomly introduced in the last episode, similar to how racist police were inserted in the first season finale.

In Episode 8, titled “Remember when Cocoa Found Her Calling?”, the teenage daughter in the family, Jade (Talia Jackson), is confronted by her best friend, a white girl named Kelly Anne, resulting in a discussion about white privilege.

Both girls enter a fashion design competition in Atlanta’s Fashion Week High School Show. Jade wins an entry into the fashion show but Kelly Anne does not. Jade tells Kelly Anne she sorry she didn’t win a spot in the competition, too. Kelly Anne offers her congratulations, but then she mentions that minorities get all the advantages, “They probably just needed some more diversity so it makes sense they picked you.” She goes on, “I just wish I had said I was part Native American on my application.” She’s not, as Jade points out, but Kelly Anne says, “By the time they figured that out, my design would have already been on the runway next to yours.”

Jade is amazed that Kelly Anne is so clueless and tells her so. Kelly Anne then says, "I guess it’s a white thing. You wouldn’t understand.”

Jade talks to her father at home and calls the conversation “reverse racism theory”. Her father, Moz (Anthony Alabi), tells Jade that race is a difficult subject but if no one ever talks about it, nothing will change. Then, as they are talking, Kelly Anne shows up at their house to apologize to Jade. Her mother, she says, called her “a Karen” when she discussed the conversation the two had earlier. Her mother "was really upset and she broke down white privilege. Now I understand how horrible I was to you. I’m so sorry.” Then she asks if she can be Jade’s assistant and that's the end of the rift between them.

Again, a random moment of woke lecturing in an otherwise sweet family comedy. Sadly, it's become par for the course on TV these days.