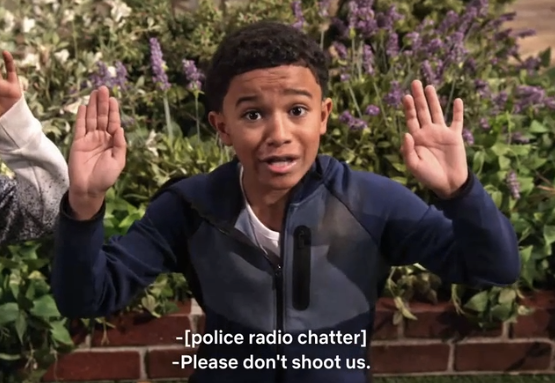 A ten-episode series centering around a traditional multi-generational African-American family in Georgia sounds like an interesting idea. The series is heavy on heartwarming family stories and family history. Netflix almost gets it right, too ... until it doesn’t.

On July 10 Family Reunion was released on Netflix. Moses “Moz” McKellen (Anthony Alabi), a retired NFL football player, his wife, Cocoa (Tia Mowry-Hardrict), and their four children visit his parents in Columbus, Georgia, for a family reunion. McKellen’s mother, known as M’Dear (Loretta Devine), is the family matriarch. Moz’s father, Jeb (Richard Roundtree), is a pastor. As their visit progresses, Moz and Cocoa decide that their life as a family would be enriched by living around a large extended family, instead of back in Seattle without family around them.

But in episode 10 titled “Remember When Our Boys Became Men?” the temptation to devolve into the Black Lives Matter narrative was just too strong. When McKellen sons Shaka (Isaiah Russell-Bailey) and Mazzi (Cameron J. Wright), and their cousin Elvis (Lance Alexander) find themselves locked out of the house after a day of mowing lawns to earn money for a new PlayStation, they begin to search for the extra key M’Dear hides on the front veranda. Then two white cops arrive and, with guns drawn, shout at the boys to get on the ground with their hands up. The camera work changes as the youngest, Mazzi, pleads with the officers, his terrified face looking directly into the camera, “Please don’t shoot us!” as one officer points a gun at him - and at the audience.

Afterwards Mazzi says, "I thought the police are supposed to protect us from bad guys. Why did they think we were the bad guys?" "Because we're black," answers his older sister. She says it's not fair, but Moz says, "I know, sweetie, but it’s the reality we’re living in."

Not long after, Moz and Cocoa are stopped on their way home by one of the same cops. He questions if Moz has been drinking, as his car was supposedly swerving. Then he mentions that he was suspended for two days without pay because of Moz’s complaint. Cocoa tells him that he was let off easy. He tells them that he is letting them off easy, too. He ends with a threat – “I’ll be watching you.”

After that, Cocoa decides she can’t live with the harassment of their family and tells Moz that they are moving back to Seattle. With that, part 1 of the show ends on a cliffhanger. Before the credits roll, pictures of Tamir Rice, Trayvon Martin, and Stephon Clark are displayed with the caption, “They could have been our sons…”

The episode uses a ridiculous assertion that two racist white cops would draw their guns on three young boys in broad daylight while looking for grown men as "the reality we’re living in." White police officers are portrayed as racist, corrupt bullies who are a threat to black families. It's a shame that the series ends on this note. The rest of the episodes were pretty good, especially for Netflix.