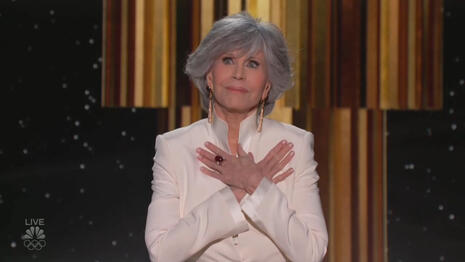 Actor Mark Ruffalo went on one of his standard liberal stream of consciousness riffs about "dying" Mother Nature after winning a Best Actor award.

Aaron Sorkin won Best Screenplay for a Motion Picture for The Trial of the Chicago 7 which depicts the aftermath of the 1968 Democrat convention that turned violent. During his acceptance speech, Sorkin quoted left-wing Chicago rioter Abbie Hoffman while delivering his opinion on the riot at the Capitol on January 6 and the crumbling of democracy.

Sorkin: Netflix saved our lives, and put us with the team of very talented people who love movie one last thing, while we were shooting, every night after wrap when I would get back to the hotel room there would be an e-mail from Sacha, with a quote from Abbie Hoffman, none of them made them to the film, and I saved the e-mail, I don't always agree with everything that the characters that I write do or say. Here is something that I have to say. "Democracy is not something you believe in or a place to hang your hat. But it's something you do, you participate. If you stop doing it, democracy crumbles." I don’t need any more evidence than what happened on January 6th to agree with this.

Norman Lear was given the Carol Burnett Award for lifetime achievement in television and lefty comedian Wanda Sykes raved during the tribute, “His comedy woke America before being woke was a thing.”

Actress Rosamund Pike won Best Actress in a Motion Picture for I Care a Lot. She made a random reference to Rudy Giuliani and America’s “broken legal system”. As she accepted her award, she said, “In my movie, I had to swim up from a sinking car. I think I still would rather do that than have been in a room with Rudy Giuliani,” referencing another nominated actress' scene with Giuliani in the Borat sequel.

Jane Fonda was honored with the Cecil B. DeMille Award, with heavy emphasis on her liberal political activism. Hollywood adores Hanoi Jane. She included references to her climate alarmism as Newsbusters has noted previously – she is a fan of the Green New Deal, wants to end fossil fuels and started Fire Drill Friday protests. Here are portions of her Globes tribute as well as her speech where she calls for a bigger tent in Hollywood, saying, “Art has always been not just in step with history but has led the way”:

Sacha Baron Cohen won for Best Musical or Comedy for Borat Subsequent Moviefilm. He thanked Rudy Giuliani. He likes to think his movie helped defeat Trump. In fact, he's repeatedly said that is the reason he made the movie.

Cohen: Thank you to the all-white Hollywood Foreign Press. Going to say this movie could not have been possible without my costar, a fresh new talent, who came from nowhere, and turned out to be a comedy genius, I'm talking about Rudy Giuliani, who can get more laughs out of one unzipping. It's incredible. Rudy went on to star in a string of comedy films. Hair dye of the Day and the courtroom drama, A Very Public Path, the sensation was Maria Bakalova. Thank you to my fellow writers, and Nina, the director, Jason Wallener, my mom, and Richard and I want to thank my crew who were amazingly brave who had the risk of getting arrested the risk of getting covid and they did it because we all believed so deeply in releasing this movie before the election to show the danger of lies, hate and conspiracies and the power of truth, empathy and democracy.

Then, when Cohen won for Best Performance by an Actor in a Motion Picture Musical or Comedy, he mentioned that the call coming in on his phone was Donald Trump. “Hold on, Donald Trump is contesting the result. He claimed a lot of dead people voted which is a very rude thing to say about the HFPA.”

There were some references to the recent news that the Hollywood Foreign Press Association has not had any black members in 20 years. Fey and Poehler tried to make an awkward joke admonishing the group and 3 HFPA members came out pledging to “ensure everyone from all underrepresented communities gets a seat at our table” and saying they “look forward to a more inclusive future.” Hollywood loves to trash the rest of America for racism/sexism/homophobia, etc. but it's become more and more clear over the years that this is just projection.

This year’s ceremony didn’t include a celebrity-filled live audience. Instead, first responders and essential personnel were given tickets to the socially-distanced bi-coastal event. There was no red carpet before the ceremony. The whole evening could have been worse but it just goes to show that even when politics is discouraged, the Hollywood elite just cannot turn it off.