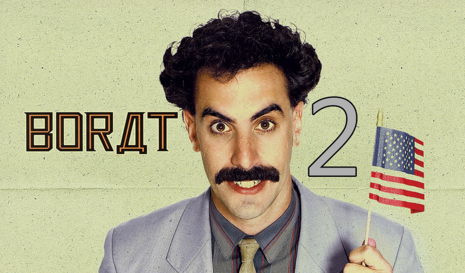 Sacha Baron Cohen admitted to what was already obvious: he made Borat 2 in order to help defeat President Donald Trump in the 2020 election. That also might explain why the obvious political propaganda piece was sunk by its own Trump Derangement Syndrome as Christian Toto explained in October.

Cohen's admission about what every sentient being already knew appeared in Saturday's Daily Mail.

Sacha Baron Cohen has revealed he made Borat: Subsequent Moviefilm to warn US voters of the 'dangers' of voting in President Donald Trump for a second term.

...He explained: 'The aim of the movie is to deliver a message. That's the reason why Borat came out when it did.

'I thought the thing I can do to warn people is to use my funniest character, my most popular ­character, to show what I thought the dangers of ­voting for Trump were. I felt democracy was at a very dangerous point.'

So Borat 2 was basically a campaign donation to the Joe Biden campaign.

'I don't want to egotistically imply that people would watch Borat and not vote for Trump, but that was the aim,' he dished.

Well, comedy obviously was not the aim as Christian Toto summed up in comparing the Borat sequel to the original:

The original “Borat” captured comedy lightning in a bottle, so any sequel seemed like a fool’s errand.

Will there be a lame Borat 3 later this year as Sacha Baron Cohen goes to California in a desperate attempt to prevent Gavin Newsom from being removed from gubernatorial office in a recall election?

Of course, the liberal media love Cohen. Last week, CBS cheered the actor as “revolutionary” and “brilliant.” The tone deaf This Morning hosts also praised Cohen for playing the ‘60s commie radical Abbie Hoffman in a new film. Hoffman incited a violent riot. Apparently some riots are okay, but others aren’t, according to journalists anyway.