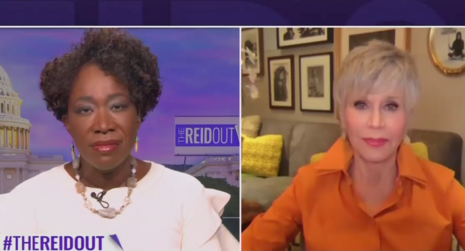 Fonda joined MSNBC blowhard Joy Reid on the September 17 edition of The ReidOut. Reid shifted her fawning over Fonda’s climate activism to questioning Fonda on how to use the wildfires to get people thinking about implementing the GND. Reid asked: “How do you get from knowing what [the GND] is and talking about it in theory — even with the fires burning — to get people to focus on this and actually get people to want to implement it?”

Fonda then took a detour into the hysterical: “They do. They are — They’re getting focused. I mean, it’s hard not to when your state’s on fire. Not only is the state on fire, birds are falling out of the air — dive-bombing dead into the ground because of the bad air!” So Americans have to foot a multitrillion-dollar proposal because, according to Fonda, “birds are dive-bombing dead”?

According to Fonda, “Talking about it is important, because if you don’t talk about it, you can’t care about it. And if you don’t care, you won’t act. We need to act.  And the main thing that we have to act about is getting rid of fossil fuels.” She continued: “[L]istening to the experts says we have to cut fossil fuel emissions in half in 10 years. Now that’s really, really hard. And it’s not going to happen unless there are unprecedented numbers of people demanding it no matter who is elected in November.”

Fonda then shifted to incoherent babbling about the importance of the November elections:

“November is important because — you know — one of the things that happens during [an] election: you choose your opponent. By opponent, I mean, the person that you’re going to have to go up against when you want other things to happen, like equal pay for equal work between men and women.”

Fonda proceeded to rant that “it’s not just a climate crisis. Our society — the fabric of our society is unraveling.” She then pushed an insane idea that the GND can solve “all” our society’s woes at once: “The great thing about the Green New Deal is it gives us a way to do it all at once, but we have to get rid of fossil fuels. That’s the main thing.”

To finish off the segment, Fonda praised Reid for her new show. In a cringe response, Reid fangirled Hanoi Jane: “OK, I officially retire. I retire. That’s it. I’m done. I’m not going to do any more TV. Jane Fonda knows who I am!”

Hanoi Jane’s climate propaganda was brought to you by advertisers like John Deere, Citibank and Allstate. You can fight back by letting these advertisers know what you think of them sponsoring such eco-extremist content.