Teen Declares, 'I May Be the Lesbian Jesus!' on ‘One Day at a Time’ Netflix Reboot 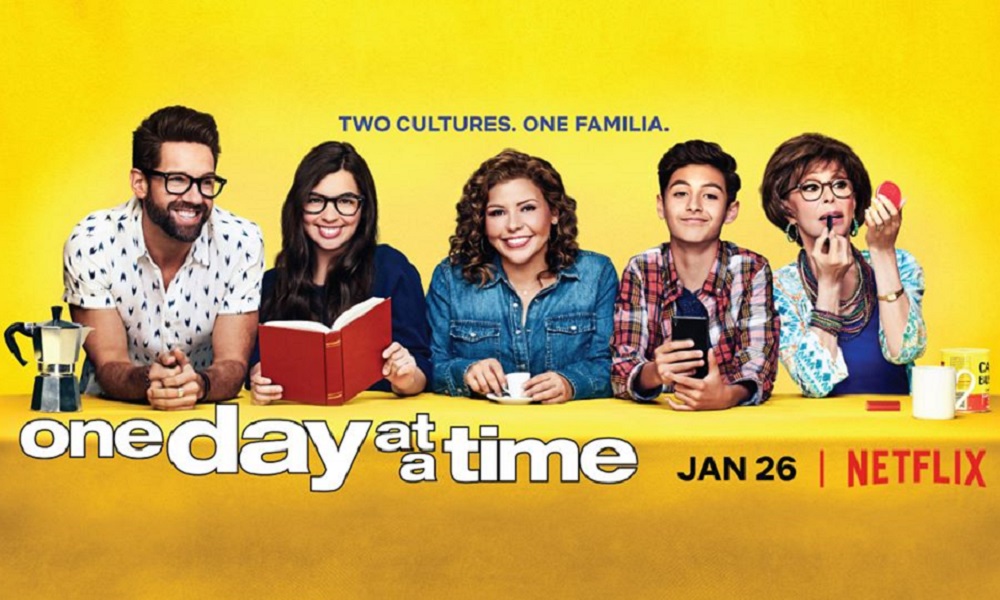 For reasons I don’t quite understand, Netflix has brought back its reboot of liberal Norman Lear's One Day at a Time for a third season. It began airing February 8 and the central theme of the teenage daughter’s lesbian sexuality is in your face from the very first episode. And, of course, there are a few random swipes at President Trump and conservatives, too, in the thirteen episodes.

In episode one, titled “The Funeral”, the Alvarez family attends the funeral of Abuela Lydia’s (Rita Moreno) sister, Tia Ophelia. During a family gathering, 17-year-old Elena (Isabella Gomez) decides that her lesbian cousin Pilar (Stephanie Beatriz) should come out to the family. She soon learns that the family already knows and even attended Pilar’s wedding ceremony. They just don’t talk about it. In other words, they accept her but don’t solely define Pilar as her sexual preference. This is in stark contrast to Elena who is obsessed with her sexuality and includes it in most of her conversations.

As Elena is telling her cousin she should come out to the family, Pilar delivers a lesson in humility to Elena. Pilar explains she doesn’t care that the family ignores the fact that she is a lesbian. “They are not going to change. Look, I know how being gay goes, right? When you first start to figure it out it’s like, 'Oh, no, I might be gay.' And then it’s like, 'Oh, I’m gay.' And then it’s like, 'Gay, gay, gay! Rainbow underwear!' But eventually you realize you’re just a person, and it’s really empowering not to have to be defined by who you want to make out with.” Elena, realizing the lesson Pilar is delivering – people are more than their sexuality – replies, “Oh, wow. I may be the lesbian Jesus but you're a lesbian God!” Really?

Additionally, at the end of the episode, a toast is given to the deceased aunt by cousin Estrellita. It is the first reference to President Trump: “To Ophelia. At least she got to see our president make America great again.” To which a startled Penelope (Justina Machado) says, “I’m sorry. What?”

In episode seven, titled “The First Time,” the subject is Elena and her "non-binary" partner Syd’s first sexual experience. They go to a hotel for privacy and a strange slap at the patriarchy is taken by Elena. She justifies losing her virginity with this statement, “Virginity is just a construct used to upheld the patriarchy, and I can’t even get pregnant.” Also noted is their safe word – Ruth Bader Ginsberg. That was just icky. When Penelope discovers Elena’s decision to become sexually active, she panics but then comes around to telling Elena that her house rule stands and Elena’s bedroom door has to remain open.

Episode ten, titled “The Man,” brings us to the topic of racism delivered by a wealthy white man, the father of the apartment building’s owner, Pat Schneider (Todd Grinnell). Lawrence Fitzgerald Schneider (Alan Ruck) delivers a few lines to Penelope and her family that are stereotypical of how Hollywood thinks racist white people sound and act.

When Pat introduces the Alvarez family to his father, Lawrence says to them, “Escobar was a friend. Too bad what happened to him.” Upon being told that Penelope is not the younger Schneider’s new girlfriend, the father mutters, “Thank God.” Then, when he meets Schneider’s white, wealthy girlfriend the elder Schneider approves with, “Now that’s more like it.” When Alex compliments Lawrence on his suit, he says, “A little boy like you made it for me.” Ah yes, a nod to class warfare, sweatshops, and racial stereotypes all wrapped up into one scene.

Later, Lawrence takes a phone call and it’s Dick Cheney. Of course. Lawrence tells his son, “It’s Dick Cheney” and then into the phone says, “Hey, what’s cracking, you old queen.” You old queen? And, for good measure, an implied phone conversation with President Trump has Lawrence saying into his phone, "What, Mar-a-Lago? Won't you be busy?" Then, after he laughs, he says, "I'm kidding. Ok, see you." A zing that the President is a slacker, no doubt.

But wait, there’s more in episode ten. The subject of gentrification is approached. The senior Schneider wants his son to convert the building into condos. Penelope can’t afford a down payment on a condo purchase so she battles Schneider over it. Penelope says that working class people can’t afford their homes when gentrification takes over a neighborhood while Schneider explains the additional return on his investment and how the neighborhood is made better.

Elena is horrified, as she apprentices with the younger Schneider and did a lot of the upgrades to the building before Schneider’s father came for the visit. She says, “All my work contributed to gentrification. I’m the white devil.” We even learn that Penelope hasn’t had a rent increase in all the seventeen years she’s lived in the building. But, her liberal daughter calls a capitalist who invests in real estate “the white devil.” Oh, brother.

Another reference to the left’s favorite Supreme Court Justice happens in episode twelve, titled “Drinking and Driving,” as Elena has a panic attack over passing her driving test. Alex tells her, “Take a deep breath. Think of something calming, like that Supreme Court lady you like – Darth Vader Ginsberg.” Elena replies, “You mean the tiny old lady clinging to life with one hand and to our frail democracy with the other?” Got that? The Notorious RBG is saving our “frail democracy."

One more Trump reference happens in this episode, too. Elena wants to speak with Lydia but Lydia shushes her, as she's watching television. Lydia says, "Hold on. I'm watching the President. Oh, wait. It is a hemorrhoid commercial." Seriously, can you imagine such jokes made about hemorrhoids and another president?

So, it’s another season of a Netflix show filled with anti-Trump and anti-conservative bashing. The Alvarez family is Cuban and rather conservative, just not so much politically conservative. There is only so far Hollywood writers will go, you know. Let’s hope this is the last of the reboot. Let it rest in peace.