Despite Liberal Twists, ‘One Day at a Time’ Reboot Schools Leftists on Che and Castro 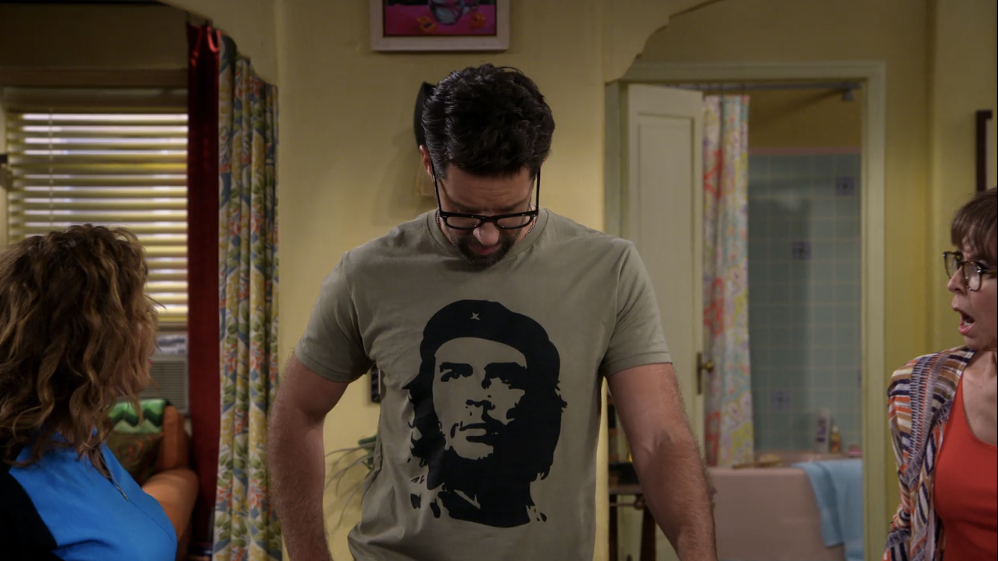 Netflix’s newly released comedy series One Day at a Time bears little resemblance to the original show that aired from 1975 to 1984. Leftist Executive Producer Norman Lear created both shows but the only similarity is the show name – and the wedging in of some liberal issues.

At a time when President Obama has liberalized relations with communist Cuba and ended the long-standing “wet foot, dry foot” policy that protected Cuban refugees, the show provides some much-needed perspective on the horrors of Castro’s Cuba peppered throughout the series. For example, when one character is being grilled, Lydia asks, “What’s with all these questions? Is this Castro’s Cuba or America?”

In the best scene of the season, the family goes off on Che chic. In episode 9, “Viva Cuba,” the building superintendent and family friend Schneider (Todd Grinnell) comes in wearing what he thinks is a cool Che Guevara t-shirt. The family is horrified, naturally. After Penelope asks him, “What in the hell are you wearing?” Schneider responds, “Viva la revolucion, am I right?” All he knows about Che, like most liberals in this country, is that he “grew an awesome beard and modeled for t-shirts.”

Penelope, Lydia and both kids begin to school the man on the truth about Castro’s right hand man. They run through the litany of Che’s many despicable acts – he supervised execution squads, committed mass murders, burned books and banned music. Schneider is astounded and protests feebly, “But…he has a cool hat!” The family explains, “It’s like if you walked into a Jewish home wearing a Hitler shirt or into Taylor Swift’s home wearing a Kanye shirt,” prompting Schneider to tear off the shirt.

The hand of leftist Hollywood is revealed, though, through two of today’s hot button issues, LGBT issues and illegal immigration.

High school teen Elena’s quinceanera is approaching and prominently featured throughout the series. Elena has no interest in this traditional rite of passage for Latinas and describes it as a misogynist cultural ritual, as though she would be paraded around before men, about to be sold into slavery. Yeah, Elena is a feminist. One reason, though, is revealed when grandma Lydia pressures Elena to pick a boy to be her escort and it becomes obvious that Elena may not be interested in boys.

In episode 7, “Hold, Please,” Elena voices confusion when it comes to liking boys. When she does pick one, she invites him to her house and kisses him. Viola. She likes boys and becomes his girlfriend. But, later she decides she doesn’t like boys and comes out to all the family, one at a time, all at the tender age of 15. Not exactly family-friendly viewing.

The second hot button issue, illegal immigration, is seen through Elena’s best friend, Carmen (Ariela Barer). In episode 5, “Strays,” Carmen, who was born in the U.S., confesses that her parents were deported back to Mexico. Carmen, says, “My parents didn’t do anything wrong…we’re a normal American family.” No one says back to her that the simple act of entering America illegally is a federal crime. It is wrong, and certainly not normal – at least, I hope not. Instead, when Elena says to Carmen, “I can’t believe they sent your parents go back home,” Carmen solemnly replies, “They didn’t send them home, they sent them away.” (Insert eye roll here.)

Lydia has a poignant story of her personal quest for freedom from the murderous Castro. She tells of her part in the Pedro Pan program that brought children under the age of 18 to America to escape to freedom. She is adamant in her belief that everyone should come to America legally, “Everyone should follow the rules, I did.” Meanwhile, Penelope lectures on “persecuted people” who can’t come here legally, so they have to break the law to make a better life for their families. Actually, we have asylum laws for that very reason, but let’s not let facts get in the way of a good liberal rant.

It is an odd reboot, with none of the original cast, except Mackenzie Phillips, who played the older daughter in the original series, does make a cameo as a Pam Valentine, a therapist in a support group for women veterans. This show would have been decent on its own without the warmed over title – and the leftist ideology.