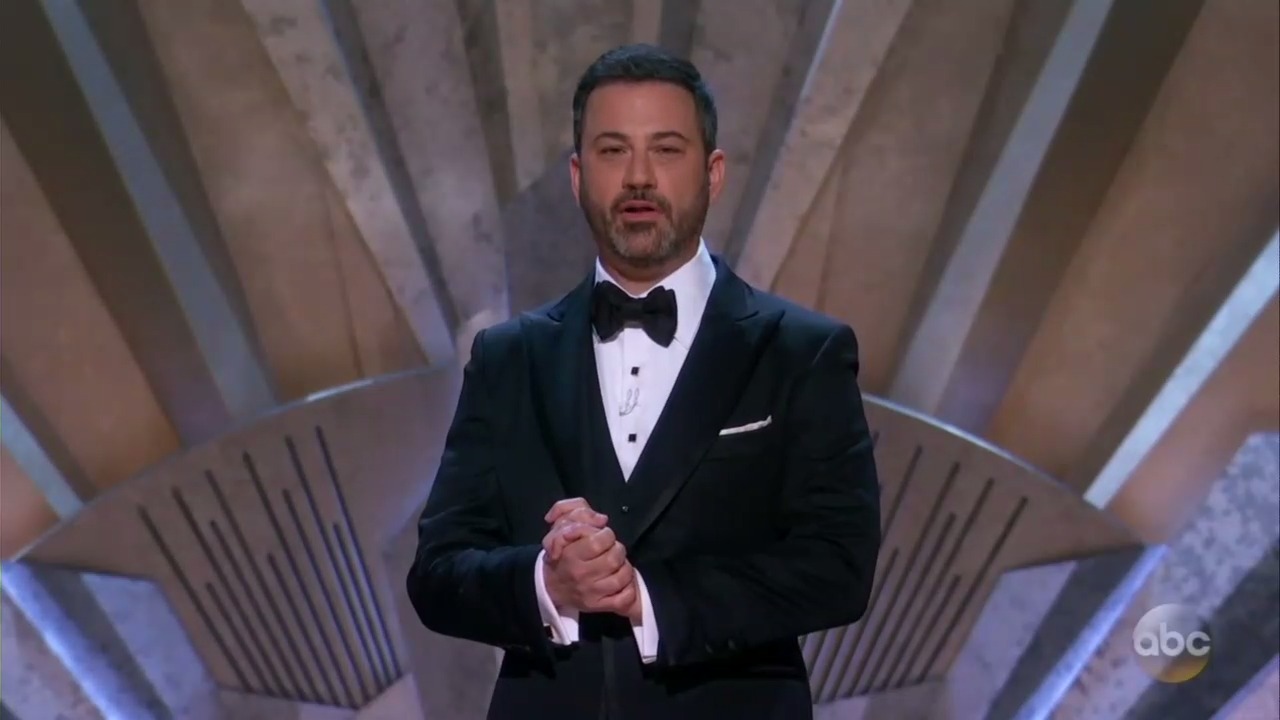 In a repeat performance from last year, late night talk show host turned liberal political activist Jimmy Kimmel hosted The Oscars on March 4. Aired on ABC in prime time, the 90th Academy Awards show was so self-indulgent and stuffed with liberal propaganda, that it ran a full 50 minutes late.

An opening vintage-style radio broadcast incorporated last year’s winners rather lamely with a days of yore tone. Of actress Lupita Nyong'o, Jimmy Kimmel's voiceover said, “She was born in Mexico and raised in Kenya. Let the tweet storm from the president's toilet begin!”

The opening monologue was rife with Kimmel’s hot takes. They included reference to Oscar’s age – 90 – and Kimmel noted, like most 90-year-olds, "He's probably at home right now watching Fox News."

While talking about Jordan Peele’s three nominations – Best Director, Best Writing, and Best Picture – and the fact that he is an African American, Kimmel said that Peele’s movie Get Out made President Trump remark it was "the best first ¾ of a movie he’s seen this year." Yeah, a not-so-clever implication that Trump is racist, if you know the film.

Then, as Kimmel pointed out the youngest actor nominated, he said his movie, Call Me by Your Name, was not made to make money but to irritate people like Vice-President Mike Pence. See, that movie is about an older man's intimate relationship with a teenage boy. The liberal audience ate it up, it was easily one of the biggest joke reactions of the night. They love to say Pence hates gays, even if they have to throw in some gay pedophilia to do it.

Kimmel: Another young a nominated for the first time is Timothée Chalamet tonight. Look at that tux. Are you having fun? This is a big deal. He's missing "Paw Patrol" to be here tonight. Don't worry, Ryder and his team of pups saved the day. He's the star of a small but powerful story "Call Me by Your Name." Only two of the best picture movies made more than $100 million. That's not the point. We don't make films for money. We make them to upset Mike Pence. Right?

Kimmel asked the winners to try to keep their acceptance speeches short. Don’t worry, he made sure to remind them of the platform they would have, though, and to make use of it as they saw fit, in an apparent attempt to dispel reports producers were discouraging political talk at the Oscars. He himself plugged the student anti-gun rally coming up later this month, saying, "If you do win an Oscar tonight, we want you to give a speech, we want you to say whatever you feel needs to be said, speak from the heart, we want passion, you have an opportunity and a platform to remind millions of people about important things like equal rights and equal treatment, if you want to encourage others to join the amazing students at Parkland at their March on the 24th, do that."

Kimmel really played up the themes of diversity and things being historic in Hollywood right now. He brought up the movie Black Panther twice, the second time going on about why superheroes are always white, and then noted what a dark and depressing time reality has been lately. Making a huge leap, he segued back to the category coming up, saying documentaries can give us hope, but Hope Hicks quit the White House Wednesday. Get it? Then (female!!!) director Greta Gerwig and actress Laura Dern came on stage to talk about how important it is now (i.e. in the Trump era) to understand what is real and what is truth.

Kimmel: Quick update, since the show started 47 minutes ago, "Black Panther" made another $48 million. Just saying. "Black Panther" has been so successful, they're already saying it's the favorite to not get nominated for anything next year. It's weird that so many superheroes are white just because that's what they were in the comics, right? People say, well, Superman is white. He's always been white. Yeah, you know what else Superman has always been? Not real. If the last two years have taught us anything, it's that reality can be depressing, but tonight's dominated documentary show us where there is darkness, there is also hope, except at the White House. Hope quit on Wednesday. Here to present the award for best documentary feature, Greta Gerwig and Laura Dern.
Laura: Good evening. And congratulations, buddy.
Greta:  Thank you. We live in a time when now, more than ever, all of us need to understand the importance of what is real, what is authentic, and what is fact.
Laura: That is why documentary filmmakers are revolutionaries, play such a vital role. For their stories of truth, of actual people and actual events, can cut through the clutter and noise and help us shape our understanding of the real world we live in.

There were a lot of hits about illegal immigration and Mexico.

After winning for Best Animated Feature Film for "Coco," Lee Unkrich ended his acceptance speech saying, “And the biggest thank you of all to the people of Mexico. ‘Coco’ would not exist without your endlessly beautiful culture and traditions,” which got sustained applause. He continued, “With ‘Coco’ we tried to take a step forward toward a world where all children can see characters in movies that look and talk and live like they do. Marginalized people deserve to feel like they belong. Representation matters."

Comedian Dave Chappelle introduced one of the nominees for Best Song, in a performance dominated by the rapper Common. The social justice warrior even worked in a new slam against the NRA – they are “in God’s way.” Standing on stage with them were "ten extraordinary human beings who answered the call to action and are unsung heroes," including Planned Parenthood President Cecile Richards – bleh! At the end, he had the audience standing on its feet as he demanded they “stand up for DREAMers.”

Common: On Oscar night this is the dream we tell a land where DREAMers live and freedom dwells, immigrants get the benefits, we put up monuments for the feminists, tell the NRA they in God's way and to the people of Parkland we say sentiments of love for the people of Africa, Haiti, to Puerto Rico.
...these days we dance between love and hate, don't know the date so we stay awake, a knee we take for our soul's sake, new victory off our old faith, a president that trolls with hate he don't control our fate because God is great, when they go low we stay in the heights, I stand for peace, love and women's rights…

Identity politics were strong and Best Actress Winner Frances McDormand got her minute to ask all the women nominated in the audience to stand as she demanded more women’s projects be funded. The winners of Best Original Song said of those nominated in their category, "Not only are we diverse, but we are close to 50/50 for gender representation." And the audience cheered when Emma Stone introduced the Best Director category with "These four men and Greta Gerwig created their own masterpieces this year."

Every awards show must have a designated lapel pin or ribbon and this year’s Oscars is no different. The gun-grabbing crowd funded by billionaire former mayor of New York City, Michael Bloomberg’s Everytown for Gun Safety, were reported to be sporting orange anti-gun violence pins. The choice of color puts new meaning to orange is the new black. This isn’t exactly a bold statement on the part of the protected class – armed L.A. police and private security guards were out in force.

The 90th Academy Awards are in the books. It was another almost four hours of self-satisfied celebrities and Hollywood elites congratulating each other while lecturing the rest of us. I miss the days of award shows that were truly fun to watch and only about entertainment, not political lectures and mean jokes.