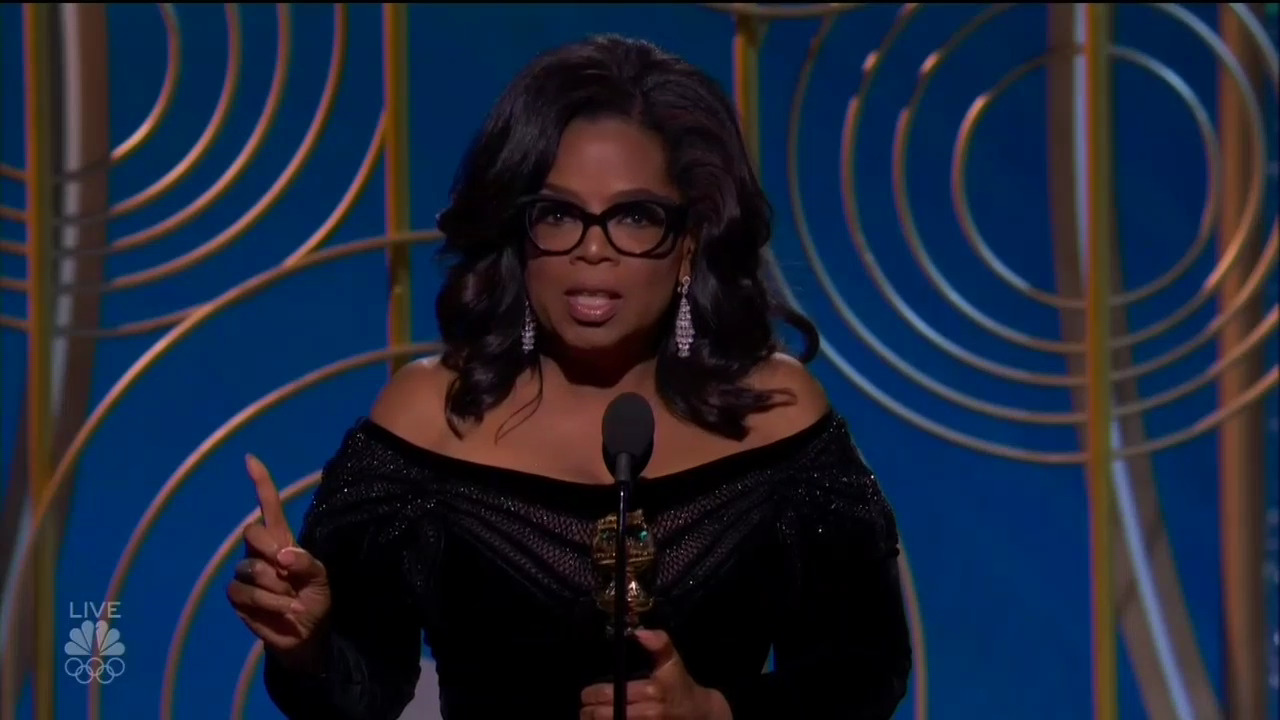 Awards season has begun, which means a fresh opportunity for Hollywood and media elites to congratulate themselves.

In the lead-up to the 75th Annual Golden Globe Awards, which aired January 7 on NBC, host Seth Meyers promised a “politically charged” ceremony. Attendees were told to wear black as a fashion statement against sexual abuse and pay inequality, plus a lapel pin saying, "Time's Up," was created as the accessory to sport.

Most of the commentary was about the problems in Hollywood – Harvey Weinstein was labeled “the elephant in the room” and only a couple of veiled shots were taken at President Trump. Meyers made one referencing his own appearance at the White House Correspondents' Dinner. He, along with the rest of the entertainment industry, really wants Oprah Winfrey to run for president. (See NBC's own Oprah for Our Future President tweet.)

Meyers also took a shot at Trump while introducing the president of the Hollywood Foreign Press Association. He described her by asking the audience to “welcome a president who actually is a stable genius.” Oh, brother. I noted she was wearing all red, not the required black attire. Heh.

Hollywood’s Queen of the Universe, Oprah Winfrey, received the 2018 Cecil B. de Mille Award and went into a bit of an alternative universe in her praise of the media. She bemoaned that the media is “under siege” and gushed they have an “insatiable dedication to uncovering absolute truth.” What?

OPRAH: I want to thank the Hollywood Foreign Press Association. We know the press is under siege these days. We also know it's the insatiable dedication to uncovering the absolute truth that keeps us from turning a blind eye to corruption and to injustice. To tyrants and victims, and secrets and lies. I want to say that I value the press more than ever before as we try to navigate these complicated times, which brings me to this. What I know for sure is that speaking your truth is the most powerful tool we all have.

Where was Ms. Winfrey during eight years of the previous administration when a whole lot of corruption and injustices were taking place, mostly against conservatives? I think “absolute truth” to Oprah and her pals mean the truth as they believe it to be, not actual facts.

The executive producer for The Handmaid’s Tale won his category and thanked journalists for "championing" his show as well as “all the people in this room and this country this world who do everything they can to stop 'The Handmaid's Tale' from becoming real.”

MILLER: Thank you so much. We have a big cast. Thank you to the Hollywood Foreign Press and all the journalists who championed this show from the very beginning. To Lizzie and to Margaret Atwood who is the mother of us all. And to my wife, Tracy, and my children, Ben, Duncan, and Tess. To Hulu and MGM who have been braver than I could possibly imagine. And to all the people in this room and this country and this world who do everything they can to stop "The Handmaid's Tale" from becoming real, keep doing that. Thank you.

Exactly who is it that is stable? This kind of paranoia isn’t normal, if you ask me.

There is something quite unsettling about Hollywood’s fascination with The Handmaid’s Tale since Trump has been in the White House. It is as though the left believes the story can come true in America at any moment. Instead, it tells a tale more akin to the fanatically Islamist nations in the Middle East.

As this article in NewsBusters explains, the story, written in 1985,  is one of a tragically suppressive world for women: “All women are deprived of their rights and are forbidden to read. Due to environmental degradation, very few women can conceive a child, and so a slave class of 'handmaids' are created, whose entire purpose is giving birth. The handmaids wear dowdy red gowns (to represent menstrual blood) with large white bonnets that obscure their faces.” That sounds more like the oppressive environment of Iran or Saudi Arabia, not America.

All in all, the show failed to deliver much in the way of flashy and outrageous headline-worthy lines or opinions like last year. We were all aware that the focus would be on the toxic atmosphere that has finally been exposed in Hollywood. Somehow, wearing expensive black formal wear and a nifty lapel pin is the equivalent to proving how concerned and dedicated the industry is suddenly to routing out the abusers. It’s particularly hypocritical watching people who have been made fabulously successful over many years in the system – looking at you, Meryl Streep – now being hailed as woke. It’s all a bit too much.