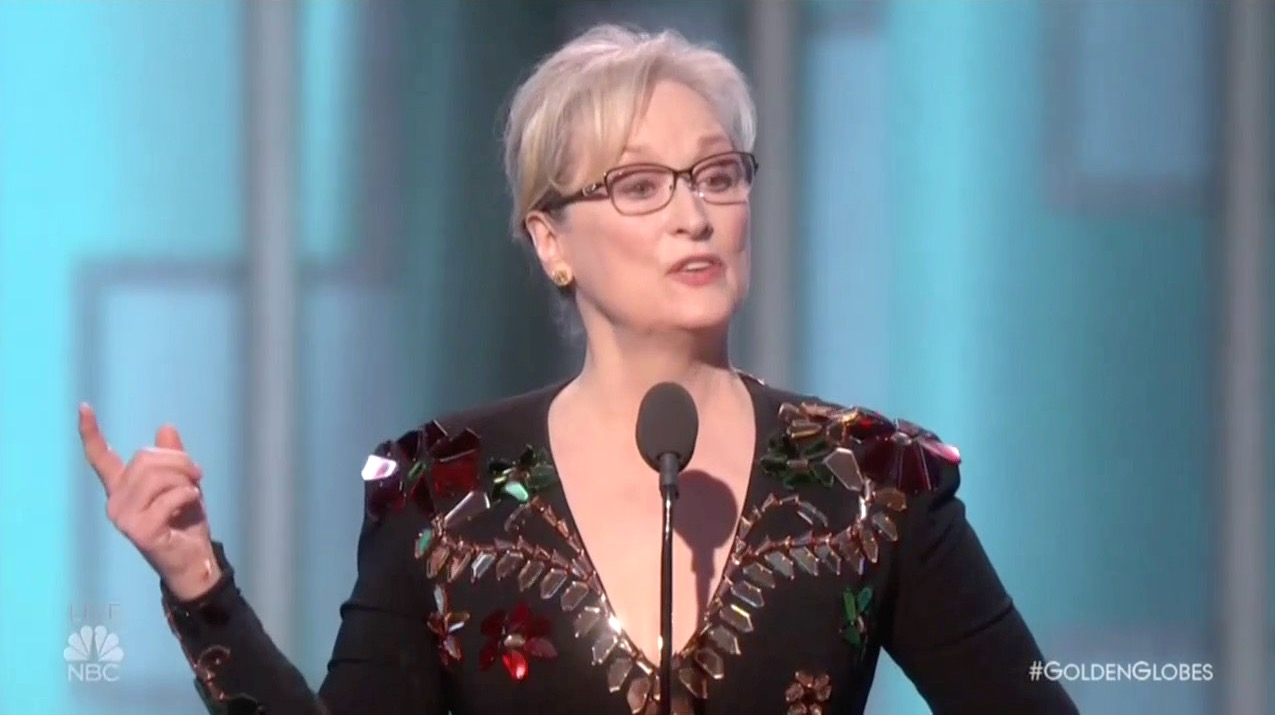 During the 74th Golden Globe Awards on NBC Sunday night, far left actress Meryl Streep delivered a dramatic, sanctimonious diatribe to the viewing audience and her fellow leftists in the audience. For almost six minutes, listeners were subjected to a laundry list of perceived wrongs that must be righted by liberal Hollywood. She may single-handedly assure Donald Trump a second term.

In her acceptance speech for the Cecil B. DeMille Lifetime Achievement Award, Streep ruminated on the individual words in "Hollywood Foreign Press" and how Republicans are against all of them. Streep talked about being a product of New Jersey – “created in public schools.” Thanks, New Jersey. She lamely said she had lost her voice “screaming” and in “lamentation” over the weekend. And that she lost her mind “sometime earlier this year.” Then she began her rant and proved it.

Streep: I've lost my voice in screaming and lamentation this weekend. And I have lost my mind sometime earlier this year. So I have to read. Thank you, Hollywood Foreign Press. Just to pick up on what Hugh Laurie said. You and all of us in this room, really, belong to the most vilified segments in American society right now. Think about it. Hollywood, foreigners, and the press. But who are we? And, you know, what is Hollywood anyway? It's just a bunch of people from other places.

I was born and raised and created in the public schools of New Jersey. Viola was born in a share cropper's cabin in South Carolina, grew up in Central Falls, Long Island. Sarah Paulson was raised by a single mom in Brooklyn. Sarah Jessica Parker was one of seven or eight kids from Ohio. Amy Adams was born in Italy. Natalie Portman was born in Jerusalem. Where are their birth certificates? [ Applause ] And the beautiful Ruth Negga was born in Ethiopia, raised in -- no, in Ireland, I do believe. And she's here nominated for playing a small town girl from Virginia. Ryan Gosling, like all the nicest people, is Canadian. And Dev Patel was born in Kenya, raised in London, is here for playing an Indian raised in Tasmania. Hollywood is crawling with outsiders and foreigners. If you kick 'em all out, you'll have nothing to watch but football and mixed martial arts, which are not the arts. [ Cheers and applause ]

They gave me three seconds to say this. An actor's only job is to enter the lives of people who are different from us and let you feel what that feels like. And there were many, many, many powerful performances this year that did exactly that, breathtaking, passionate work.

There was one performance this year that stunned me. It sank its hooks in my heart. Not because it was good. There was nothing good about it. But it was effective and it did its job. It made its intended audience laugh and show their teeth. It was that moment when the person asking to sit in the most respected seat in our country imitated a disabled reporter, someone he outranked in privilege, power, and the capacity to fight back. It kind of broke my heart when I saw it. I still can't get it out of my head because it wasn't in a movie. It was real life. And this instinct to humiliate, when it's modelled by someone in the public platform, by someone powerful, it filters down into everybody's life, because it kind of gives permission for other people to do the same thing. Disrespect invites disrespect. Violence incites violence. And the powerful use their position to bully others, we all lose. Okay. Go on with that thing.

This brings me to the press. We need the principled press to hold power to account, to call them on the carpet for every outrage. [ Cheers and applause ] That's why our founders enshrined the press and its freedoms in our constitution. So I only ask the famously well-heeled Hollywood Foreign Press and all of us in our community to join me in supporting the Committee to Protect Journalists. Because we're going to need them going forward. And they'll need us to safeguard the truth.

One more thing. Once when I was standing around on the set one day whining about something, we were going to work through supper, or the long hours or whatever, Tommy Lee Jones said to me, isn't it such a privilege, Meryl, just to be an actor. Yeah, it is. And we have to remind each other of the privilege and the responsibility of the act of empathy. We should all be very proud of the work Hollywood honors here tonight. [ Applause ] As my friend, the dear departed Princess Leia said to me once, take your broken heart, make it into art.

Her rant was mostly incoherent sentences with names of actors and countries tossed in to show Hollywood’s diversity. Then she accused Trump of mocking a disabled reporter for gestures he regularly uses.

Notice that she said Hollywood must protect journalists. She actually acknowledged the connection of journalists today and their Hollywood counterparts. The bubble is all encompassing in La La Land. She made it clear – Hollywood hates the very people who buy their movie tickets and watch their TV shows, the regular "deplorable" Americans.

Streep said, "An actor's only job is to enter the lives of people who are different from us and let you feel what that feels like." Hey, Meryl, shut up and act.

Streep wasn't the only celebrity to go after Trump. Host Jimmy Fallon made some lame jokes at the president-elect's expense and said the Golden Globes are "one of the few places left where America still honors the popular vote."

Fallon: "Game of Thrones" is nominated tonight. The show has so many plot twists and shocking moments. A lot of people have wondered what it would have been like if King Joffrey had lived. In 12 days we'll find out.

We have two-time Golden Globes winner and seven-time nominee Matt Damon tonight. Looking good, buddy. Of course we all know Matt Damon from his greatest acting role, telling Ben Affleck that he liked "Batman versus Superman." I liked it.

The film "Florence Foster Jenkins" is nominated. The character, the character has been dubbed the world's worst opera singer. And even she turned down performing at Donald Trump's inauguration.

Amazon did pretty well tonight. 11 nominations for Amazon. Jeff Bezos is here tonight. He arrived yesterday but there was no one to sign for him. That was an Amazon joke.

Of course there's always the ballots for tonight's Golden Globes, carefully tabulated by the accounting firm of Ernst and Young and Putin.

Others made thinly-veiled digs at Trump. After their win, the creators of the animated movie Zootopia said, "We wanted 'Zootopia' to be a film that not only entertained kids but also spoke to adults about embracing diversity, even when there are people in the world who want to divide us by using fear." While Isabelle Huppert, who won Best Actress in a Motion Picture for Elle, said in broken English, "Do not expect cinema to put up walls and borders."

Hugh Laurie stole a little bit of Streep's thunder by talking about Republicans' dislike of the words "Hollywood," "foreign," and "press" earlier when he won.

Thank you first of all to the Hollywood Foreign Press Association, for this amazing honor. I suppose it's made more amazing by the fact that I'll be able to say I won this at the last ever Golden Globes. I don't mean to be gloomy. It's just that it has the words "Hollywood," "Foreign," and "Press" in the title. I also think that to some Republicans, even the word "Association" is slightly sketchy.

Overall the Golden Globes was a Hollywood love-fest for themselves, and a hate-fest for Trump and anyone outside their small elite bubble. Wonder what the Oscars under President Trump next month will bring!