‘The End of Monogamy?’: Relationship Advice From a Polyamorous ‘Throuple’

On July 17th, Fox News interviewed a polyamorous “throuple” consisting of a married couple and their girlfriend. Cathy and Thomas Keen have been together for the past decade and share a 7-year-old son. They also share a 27-year-old girlfriend named Nicole Everett. Nicole and Cathy worked together for a dating app for “open-minded couples” and singles called “Feeld.” The two were friends before Cathy introduced Nicole to her husband. 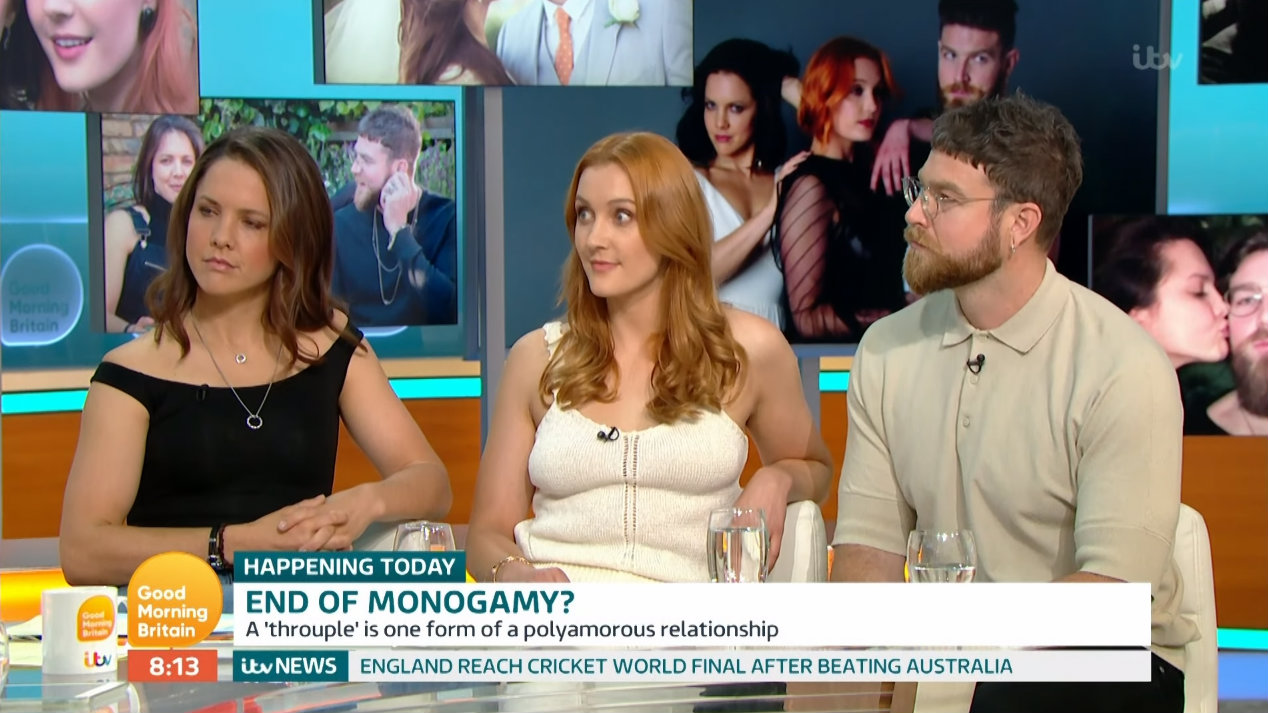 The “How I Met Your Mother's girlfriend” story was reiterated in an interview with Good Morning Britain on July 12th. The U.K. TV interview flashed a chyron that read “End of Monogamy?” while Cathy preached the importance of feeling “secure” in a romantic relationship. The throuple insisted that there are “many more positives” to being in an open relationship. The interviewers praised the throuple’s happiness and their apparent stability.

Though the throuple is Nicole’s first polyarmorous experience, Thomas and Cathy stated that they were previously in a “quadrouple.” The married couple are repeated polyamorous offenders, and in their Fox News interview, Cathy admitted that she had spoken to psychotherapists about her “kink”:

Cathy even joked that she thinks it’s ‘a bit of a kink’ out of people finding her husband attractive. ‘I've spoken to psychotherapists about it in the past. They said it displaces jealousy — it's how your body manifests it, but it doesn't feel like that's me,’ she added.

The Fox News interview focused on the reactions the throuple’s families had to the odd relationship. Cathy lamented that she came from a “strict Christian background so the initial reaction was one of shock.” To justify her relationship, Cathy employed a “live and let live” attitude:

I’m sorry that we do offend some people with it, but essentially [it’s] just because we have a different set of beliefs that are governing the way that we behave.

If you look closer, however, the throuple’s argument goes beyond simple laissez-faire reasoning. For instance, Cathy uses #ethicalnonmonogamy for all her Instagram posts (by the same token that pimping can be “ethical”). This reveals a peculiar trend surrounding lefty rationalization of clearly immoral acts. The underlying notion doesn’t appeal to absolute moral relativism; they are claiming that their way of life is in-fact good, not just permissible. “Nonmonogamy” can be ethical and therefore worth replicating.

The left has been pushing this agenda for years. From The Atlantic to The New York Times to Slate, they sell the idea that because some people find marriage hard, and sometimes unfulfilling, marriage itself is the problem, rather than people too selfish, immature, or morally stunted to be married. As pointed out by Jada Smith, rising divorce rates has pushed the emergence of “alternative relationships.” Nicole, Thomas, and Cathy are all children of divorced parents. A majority of divorces cite infidelity as the main reason, so instead of addressing the root issue, people are capitulating. Why fight against adultery when you can just integrate it into your marriage?