Ever since her decision to go political back in October, Taylor Swift has chugged the entire pitcher of liberal Kool-aid. On Saturday, Swift posted a letter she wrote to Tennessee Senator Lamar Alexander on her Instagram. The letter urged the Senator to support the Equality Act, an “anti-discrimination” bill that discriminates against religious views on traditional marriage and biological sex. 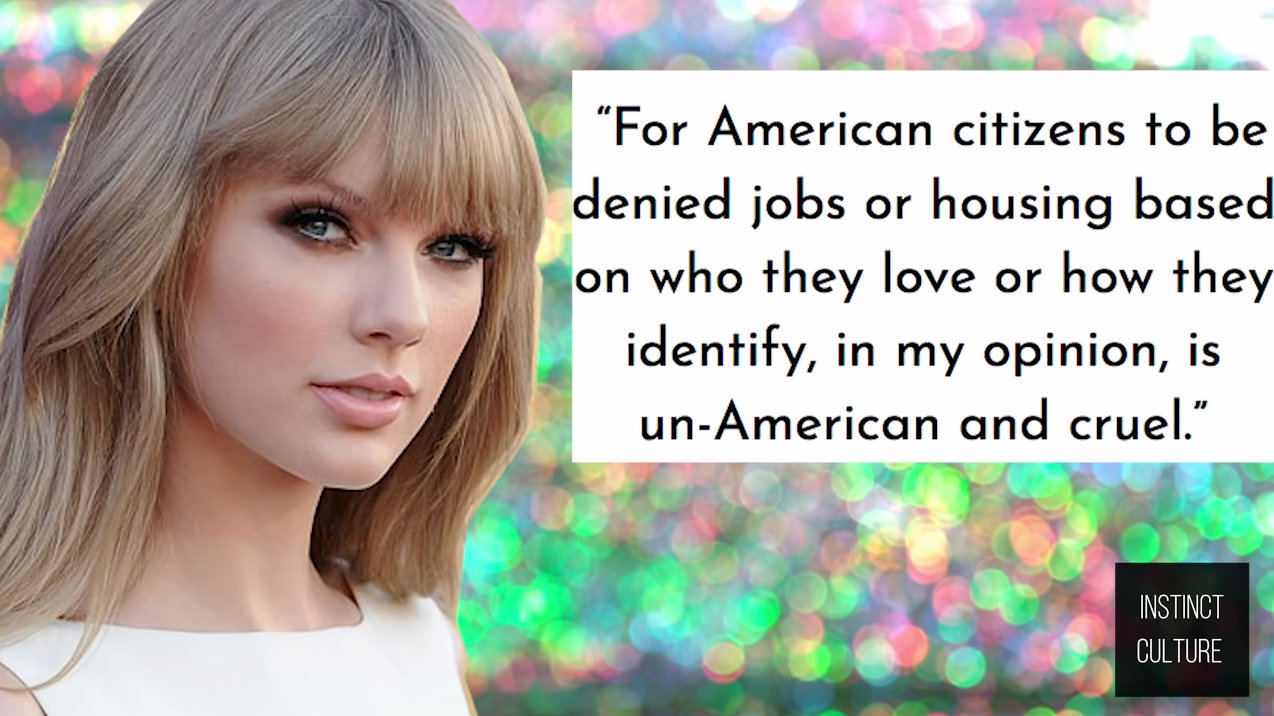 The deceptively named “Equality Act” would amend the Civil Rights Act of 1964 to include “sexual orientation” and “gender identity”. According to the Heritage Foundation, the bill would force Christian bakeries to bake cakes for gay weddings, Catholic orphanages to give children to LGBT parents, doctors to perform gender reassignment surgeries, parents to give their children hormone blockers, schools to allow boys into girls’ restrooms, and sport teams to allow biological males to compete with girls. The so-called “Equality Act” would, in fact, promote inequality against religious groups. Oh, cruel irony.

Swift also pushed the Senator to oppose the “slate of hate,” a collection of bills designed to defend religious liberty that has been viciously smeared by the media for being “anti-LGBT,” set to pass in her home state of Tennessee. In effect, these bills would protect religious citizens from exactly what the Equality Act will impose: government discrimination against sincerely held beliefs.

The bill passed through the House of Representatives last month, so it is now set to go before the Senate. Swift pleaded to her fans, “I urge you to write to your senators too [sic]. I’ll be looking for your letters by searching the hashtag #lettertomysenator.”

Swift went on preaching that America’s “lack of protection” of LGBTQ people ensures that they “must live in fear that their lives could be turned upside down” by homophobia or transphobia. Supposedly, America’s bigotted laws leave people “at the mercy of the hatred of others” and that is “disgusting and unacceptable.”

Any virtue signalling social media post wouldn’t be incomplete without a shot at the big bad Orange Man. In her letter, Swift also stated:

I personally reject the President’s stance that his administration, “supports equal treatment of all,” but that the Equality Act, “in its current form is filled with poison pills that threaten to undermine parental and conscience rights.”...That statement implies that there is something morally wrong with being anything other than heterosexual and cisgender, which is an incredibly harmful message to send to a nation full of healthy and loving families with same-sex, nonbinary, or transgender parents, sons or daughters.

Slate reported that Swift performed wearing a flamboyant rainbow outfit at the iHeartRadio Wango Tango concert just hours after posting the letter. Brendon Urie, the lead singer of the band Panic! at the Disco who identifies as pansexual, joined her on stage, sporting a T-shirt with rainbow bolded phrases that read “100% Love, 100% Equality, 100% Loud, 100% Proud, 100% Together, 100% Me.” It forgot to add “100% Brainwashed.” Swift later introduced her song “Delicate” by not-so delicately urging the audience to sign her petition on Change.org to publicly support the Equality Act.

Unlike the rainbow decorated Listerine bottles at your local CVS, Swift’s advocacy isn’t all for show. In April, she made a generous donation of $113,000 to the pro-LGBT Tennessee Equality Project. Based on the promise she made in March to be “more active in political campaigns,” it seems like Swift and sanity are never, ever, ever getting back together.