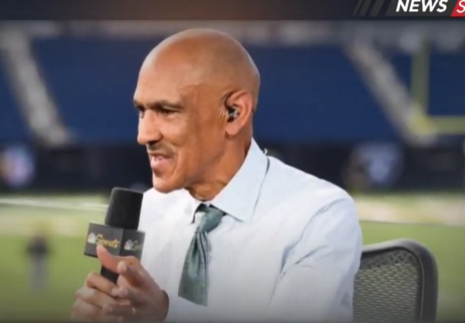 “Despite the claims from opportunists, we’re not out to destroy religion or biblical culture,” Outsports writer Ken Schultz claimed in yet another of its ongoing anti-Christian hit pieces Tuesday.

It’s just a coincidence that Outports is slamming Dungy for his Christian beliefs every other day this month, on average. There is no agenda here against Christians prioritizing biblical values over the alphabet mob’s demands. There’s no concerted effort to get Dungy fired by NBC Sports. Put those foolish thoughts aside and move along.

Let’s put this claim to the test by recounting Outsports anti-Dungy crusade:

Jan. 21: Tony Dungy’s statement was not an apology. Not even close. - Outsports

Read this laughable denial by Schultz of any effort to demonize Dungy and other Christians opposed to anti-biblical sexual behavior:

But Dungy and (NHL player Ivan) Provorov have both suddenly been united by their transformation into heroic figures for a certain class of reactionary sports pundits, analysts and fans. These groups are all too eager to use the two as their latest ‘proof’ that the LGBTQ community is using them to push some agenda down everybody’s throats.

That’s right. The 'gay agenda' is back and this time it’s coming for your mediocre defensemen and your monotone studio analysts!

The “gay agenda” has not returned; it never left. LGBTQABCD fascists have completely captured pro sports and the left-stream media, who bow to them. They’re angry over the last few non-compliant sports commentators.

Outsports cited Jason Whitlock, of The Blaze, for his tweet:

“The backlash against Tony Dungy is well-orchestrated and not remotely organic. The motive is to outlaw a biblical worldview. The anti-God agenda is so strong and obvious. I'm so sick of alleged Christians sitting silent while someone like Tony has his character assassinated.”

Clay Travis, who tweeted: “The usual woke suspects in sports media are trying to cancel Tony Dungy, demanding that he be fired for not sharing their politics.”

“In trying to cancel @TonyDungy are y’all saying Christians, Muslims & Jews who hold to the historic, orthodox beliefs of their faith are no longer welcome in mainstream society? If we can tolerate working with & respecting those w/different beliefs, then u must tolerate us!”

Dungy’s defenders are bludgeoning the alphabet mob with debate by taking a “rhetorical steel chair to the head,” Schultz roared. Despite Outsports’ outburst of anti-Dungy attacks, he defends it by contending Christians have the freedom to express their beliefs. It just doesn’t shield them from criticism … or month-long attacks.

Thus, “Destroy Dungy Month” aims to cancel him for expressing his Christian beliefs. Schultz still insists that the mob is not engaging in an anti-God agenda, and his post should strike everyone as being eminently reasonable.

This is clearly the eminent reason of an alternate universe where God-fearing people are despised.