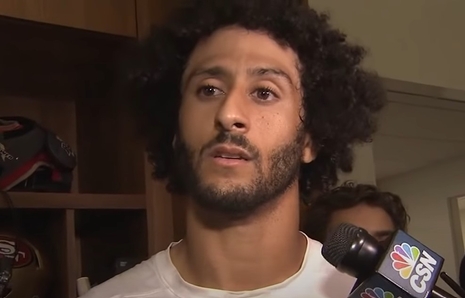 Conservative Americans are hailing a rebirth of free speech with Elon Musk gaining ownership of Twitter. Nutty leftists are citing – of all people -- Colin Kaepernick to “prove” conservatives are hypocrites about free speech.

Among the other Twitter remarks falsely claiming a free speech correlation between conservatives and Kaepernick included these examples of left-wing lunacy:

“Should Musk buy the NFL so he can bring back free speech and Kaepernick won't be punished.”

If lefties truly wanted to score points about free speech, Kaepernick would be the last person they’d choose.

Kaepernick foolishly walked away from the San Francisco 49ers and an NFL contract after he brought partisan politics to the workplace. He was not fired. Nor was he denied his free speech rights during the national firestorm he created in 2016. For a marginal athlete like Kaepernick, the worst thing you can do is to make yourself and your employer look bad in the same year your contract runs out. It's not the kind of thing that attracts prospective employers.

If bank or grocery store cashiers had repeatedly imposed their political allegiances on, or told their customers they hated America, they would rightly be fired. They would not be allowed to finish the workday, unlike Kaepernick who finished the season without suspension, censorship or the loss of his job.

Kaepernick also foolishly sued the NFL for blackballing him and, even today, he still demands that one of its teams give him a job. Only a fool would engage in such self-destructive ways. His behavior was the key, not the free speech rights he has never been denied.

Furthermore, Kaepernick continually trashes the NFL, thereby minimizing his chances to get a quarterback job. He ought to write a book about how to alienate a potential employer and disqualify yourself for a job. He’s the authority on that topic. Only a moron would trash-talk a potential employer in public and demand it hire him.

On the other hand, conservatives have been banned by Twitter. They were de-platformed for questioning the integrity of the 2020 election. Twitter and Facebook quickly became the faces of un-American Big Tech censorship and indoctrinating users. YouTube also shut down conservatives or minimized their audiences.

Kaepernick (seen practicing his free speech in photo from 2016) has never suffered censorship by Twitter or any other social media platforms. He’s a hero to the Left for his free radical speech.

Yet now conservatives are facing another real threat to their free speech with the Biden Administration instructing the Department of Homeland Security to monitor all Americans’ speech. Colin Kaepernick doesn’t have a thing to worry about from this un-American threat. Conservatives do.