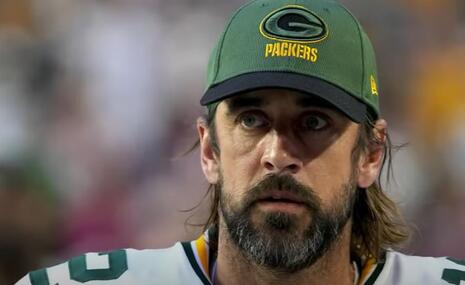 Almost all professional athletes are fully vaccinated. Almost all of the highest-paid athletes are fully vaccinated. Yet the nitpickers at Forbes magazine shamed the very few who have not indicated their status, including Aaron Rodgers, who isn’t even on the highest-paid list. But what does a little rule-bending hurt if you can throw a Most Valuable Player onto your list in hopes of getting more clicks for your brow-beating story?

As if Rodgers hasn’t been criticized enough by self-righteous media, Derek Saul had to add one additional tarring and feathering of the Green Bay Packer quarterback. Rodgers is one of only 13 athletes non-vaccinated athletes getting roasted by Forbes.

“Though he narrowly missed Forbes’ ‘Highest-Paid Athletes list, Green Bay Packers quarterback Aaron Rodgers perhaps brought the most attention to himself for his vaccine skepticism,” Saul said in admitting the salary criteria wasn’t actually the real criteria for the story at all.

The NFL’s reigning most valuable player – who isn’t really on the list of highest paid athletes – “unleashed a firestorm after he was revealed to be unvaccinated after testing positive for the virus in November,” Saul wrote. Rodgers – who isn’t among the high paid athletes – said he feared the vaccine could cause sterility and fertility issues.” There is no evidence to this claim, Saul said.

Notch taken out of superstar athlete by obscure reporter who can’t stick to his reporting criteria.

What’s more is this: if only 13 athletes were not vaccinated, if nearly 100 percent are vaccinated, why are the pro sports leagues scrambling in response to COVID outbreaks? Are these foolproof vaccinations not foolproof? Certainly not.

As for athletes who actually are on the highest paid list, Saul merely stated that 13 had resisted the vaccination, but it is believed they are now vaccinated. The main purpose is not only to shame resisters, but also to create a PSA declaring the vaccinations as totally safe. While ignoring the outbreak behind the curtain.

It’s not hard to understand why athletes were hesitant to get jabbed. There are risks, though rare, of death (10,688 through Dec. 20, 2021), severe allergic reactions, blood clotting, paralysis and more.

That’s not supposed to matter if you wear a shirt stating Knicks, Steelers or Flyers on the front. Or if your name is on the wealthy list. Then the media give you no quarter for vaccination concerns. Your rights of conscience suddenly disappear.

Nonetheless, athletes who perform in the public eye are not allowed to weigh such serious risks to themselves. They’re supposed to take one for the team even if they some doubts. In fact, they’ve had the media riding them all season to set their well-being aside for vaccines with very shaking records.