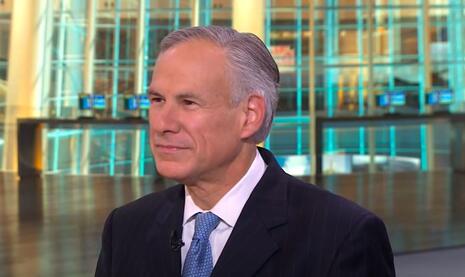 LGBT hearts are breaking over the new “Save Women’s Sports” law in Texas. Gov. Greg Abbott signed the bill to prohibit males from competing on female sports teams in his state’s public schools, colleges and universities. Left-stream media are incorrectly portraying the law as discrimination against transgenders, and LGBT pressure groups are singing the blues.

My heart is breaking all over again for our communities in Texas who have been tirelessly and fiercely fighting anti-transgender legislation session after session. HB25 is yet another callous example of lawmakers passing legislation that bullies and targets kids who just want to play sports with their friends.

Tim Stelloh’s NBC News propaganda was headlined, “Texas Gov. Greg Abbott (seen in above photo) Signs Law Restricting Transgender Students In School Sports.” His story didn’t even mention the name of the law, and he portrayed it as “discriminatory” against LGBT athletes. The photo of LGBT advocated protesting the law at the state capitol in Austin was a dead give-away of NBC’s position.

One supporter of the law was quoted by NBC as saying the new law was intended to protect girls’ sports. The narrative, though, was that transgender “girls” are going to be completely banned from public school sports in Texas. These agenda-driven media have been giving a wink and nod to their LGBT friends and tossing objectivity into the wind. As they’ve long done.

Stelloh’s featured quote, from Equality Texas, read “that if Texans ‘want to protect children, the goal shouldn't be to prevent trans kids from participating in sports, but to give all kids the freedom to make friends and play without fearing the kind of discrimination many older trans people face on a daily basis.’”

The NBC story said there's no threat to women’s sports in Texas, but Barnes said the Lone Star State has one of the nation’s largest transgender populations.

This is adults bullying kids. At the heart of it is this body legislating trans people out of existence. We're talking about public accommodations. Trans people exist in these spaces. When you're letting bills like this become law, the message is, "We don't want you in these spaces."

Barnes was already speculating about the NCAA removing postseason events from Texas, as it previously did with North Carolina over its 2016 bathroom bill.

The Save Women’s Sports law will take effect in January. Students who are confused about their gender will then be required to compete on the team corresponding to their birth certificate. Yahoo Sports stressed that this “may differ from their gender identity.”

Amit Paley, CEO and executive director of the LGBT-friendly Trevor Project, indicated his organization will challenge the Texas law in court.