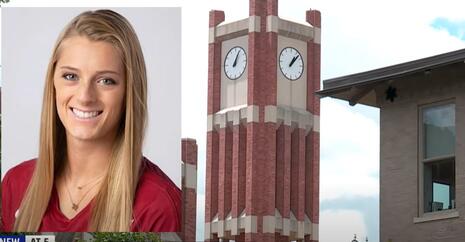 A former All-Big 12 Conference volleyball star is suing the University of Oklahoma for spiking her free speech. Kylee McLaughlin alleges she was branded a racist and disenfranchised from the team because of her politically conservative views, according to reports by Yahoo Sports and USA Today.

After George Floyd was killed in 2020, the Sooners volleyball team swerved hard Left with woke indoctrination. Coaches shamed white team members with claims of white privilege, obsessed on social justice and required the players to watch the documentary “13th” (which focuses on the incarceration of African Americans). The coaches also imposed critical race theory on the team.

McLaughlin, a white Christian, said she supports equality, social justice, and finds racism despicable. However, her lawsuit notes that she paid a steep price for speaking out against the Sooners’ woke culture.

During a team discussion, McLaughlin said the movie 13th was slanted to the left, it “took some shots” at former President Donald Trump and portrayed America as racist. McLaughlin attributed black incarceration rates largely to drug crimes. Additionally, she used social media to criticize claims that the University of Texas school spirit song, “The Eyes of Texas,” is racist.

McLaughlin quickly found out how intolerant the coaches and some teammates were. Free speech and disagreement with the team’s prevailing woke culture drew strong rebukes.

An African American teammate pegged McLaughlin’s comments as “racist.” Multiple Texas and Oklahoma volleyball players rejected her opinion on the “Eyes of Texas” controversy, and the OU coach ordered her to delete the post. She called the Texas women’s volleyball coach to apologize – even though a UT panel affirmed the song as not racist.

The lawsuit also described a Zoom meeting with Oklahoma coaches in which McLaughlin was told "she did not fit the culture of the program and they could not trust her based on comments she had made in the past."

Oklahoma coaches and teammates branded McLaughlin a racist and homophobe. Volleyball coaches and administrators told her she did not fit the program’s culture and gave her a lose-lose ultimatum. She could keep a non-playing scholarship, transfer out or redshirt for a year.

McLaughlin initially chose the redshirt option and was subjected to a mandatory “Growth Plan” and diversity training. All of which amounted to a violation of free speech and due process, the lawsuit contends. She was cast in a “false light and intentionally inflicted emotional distress” from the racist and homophobe accusations.

McLaughlin is suing OU’s head volleyball coach Lindsey Gray-Walton and assistant coach Kyle Walton, according to The Oklahoman. The lawsuit seeks a minimum of $75,000 for each of five complaints.

"When she’s creating a situation that is a hostile environment for some of her other teammates then the coaches must act to the benefit of her team.

"From what I can tell she hasn’t suffered any damages. She was given options to remove herself from the situation, so, she’s not damaged. I think that’s gonna be a huge obstacle for her and for her lawyers to overcome.”

McLaughlin’s free speech, according to Ford, is dismissed as “hurt feelings.”

The volleyball star has transferred to the University of Mississippi in search of a government school that puts free speech above woke indoctrination.