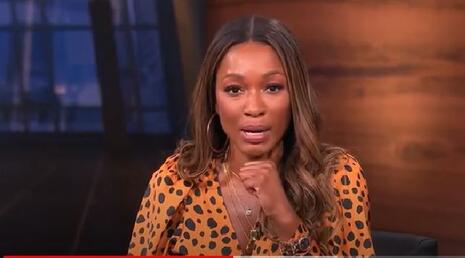 Instead of opening with another thundering denouncing of white people, Thursday night's fourth episode of TNT's "The Arena" focused on racism as a "global pandemic" and put the heat on professional sports owners to provide space for social justice activities. Especially conservative owners who haven't yet aided the Black Lives Matter (BLM) movement.

Early on "The Arena," hostess Cari Champion, of ESPN (seen in photo above), interviewed Masai Ujiri, an English-born Nigerian and president of basketball operations for the NBA's Toronto Raptors. He is totally on board with BLM, and his is the only team at the NBA's Orlando bubble with "Black Lives Matter" displayed on its team bus. He says racism is everywhere and it's a "global pandemic."

Champion mentioned Major League Baseball's Thursday start with four teams kneeling en masse, calling it "a moment of unity as part of a pregame ceremony." She could say this because there weren't any fans present to jeer the mixture of social justice and baseball.

"They said it's not specific to racial inequality or police violence against black Americans, but recognizing the many hurdles faced by major league baseball players," Champion said. "Meanwhile when politics and sports intersect you often hear 'stick to sports.' Problem is the two are not mutually exclusive. When Colin Kaepernick took a knee it divided a culture and fan base. Because of him, his peers feel more empowered."

"The Arena" featured NFL players Josh Norman and Demario Davis, who at least took their activism through a tour of five cities rather than shoving it in the faces of fans buying tickets for football. Davis complained about the reasons attributed by opponents to sports protest:

Their tour started in Atlanta, and Davis said the blacks there are still oppressed by gentrification. They also stopped in Washington, D.C., where an unidentified man tells Norman and Davis, "You have to be clear in the messaging of defund police, that they get to what that means. That means divesting from police and investing in the communities."

In the latter stages of the program, Davis, Norman and "The Arena" panelists debated the sincerity of NFL Commissioner Roger Goodell's public apology for not listening to his league's social justice warriors earlier.

Davis said, "They put that statement out there. They put a bullseye on their back. They're not putting out anything like that if they're not behind it. That's growth. That's what moved things is the people."

Panelist Jemele Hill, a writer for The Atlantic magazine, is skeptical that NFL players can hold Goodell accountable going forward.:

"We'll see. What people need to realize -- you saw Roger Goodell say something. He works for the owners. There are 32 NFL owners, most of which you haven't heard from. We don't know what they think. Particularly since a lot of the owners have conservative principles. They've not been behind this movement and they sold Colin Kaepernick out. I just have a lot of mistrust when it comes to what they'll actually do."

Charles Barkley criticized a failed suggestion that the NFL give teams hiring black coaches draft perks as insulting. Yet in discussing his concerns over education during the pandemic, he questioned whether black children are capable of using computers for distance learning:

"I'm really concerned about the young black kids, especially for the next three months. How are they going to learn on the same level as some of the private schools or rich white schools. That really concerns me more than anything going forward. We can't let them get further behind in the education gap. We're already behind in the economic gap. If we get crushed during this pandemic academically, we might not ever recover."

Coming from a white person, these remarks would have been denounced as highly racist.