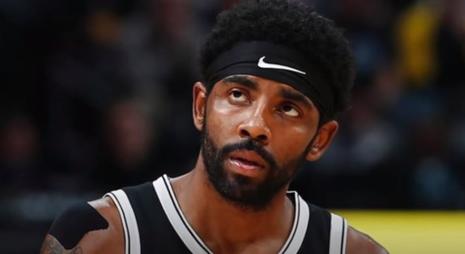 Finally, some athletes are talking about not taking a knee in protest. Before you get too excited, though, there's more to the story. A group of NBA players say they're willing to stand up -- against systemic racism and also willing to boycott the rest of the NBA season.

Brooklyn Nets guard Kyrie Irving (appearing in photo) and the Lakers Avery Bradley are leading this effort and getting support from former player Stephen Jackson, who says NBA games would merely get in the way of social justice activism. They've formed a coalition of NBA players to discuss social justice options and whether or not to support the league's plan to resume play in Florida.

Some of the people involved in Irving's coalition are militantly opposed to restarting the NBA season. Some over fears about COVID19 spikes, but others are more concerned about involving themselves in activism.

Irving told the coalition he is “willing to give up everything” for the cause. "I don’t support going into Orlando. I’m not with the systematic racism and bullshit. Something smells a little fishy. Whether we want to admit it or not, we are targeted as black men every day we wake up.”

The Nation's commie sports editor Dave Zirin says these players "think the issues of racial justice and stopping police violence are so pressing at the moment that the NBA runs the risk of becoming a distraction to the movement in the streets."

Jackson, who has compiled a lengthy rap sheet including charges of felony criminal recklessness, disorderly conduct, and assault and battery, supports a boycott. Suspended 30 games, costing him $1.7 million in lost salary, for his violent actions during the 2004 "malice in the palace" NBA brawl, he is said to be leading the struggle in the streets. Jackson said on Instagram that now is the time for fighting, not basketball:

"I love the NBA, man. Now ain’t the time to be playing basketball, y’all. Playing basketball is going to do one thing: take all the attention away from the task at hand right now and what we’re fighting for."

Jackson knows what he's talking about when he says basketball can be a distraction. In that NBA brawl, he went "Antifa" -- walking among seated fans and beating one man on the head.

Irving's coalition, which also includes entertainers and players from the Women's NBA, released a statement to ESPN's Adrian Wojnarowski describing themselves as "native indigenous African Caribbean men and women entertaining the world who will use their voices and platforms for positive change and truth." In part, their statement reads:

"As an oppressed community we are going on 500-plus years of being systemically targeted, used for our IP [intellectual property]/Talent, and also still being killed by the very people that are supposed to “protect and serve” us.

"WE HAVE HAD ENOUGH!

"We are combating the issues that matter most: We will not accept the racial injustices that continue to be ignored in our communities. We will not be kept in the dark when it comes to our health and well-being. And we will not ignore the financial motivations/expectations that have prevented us historically from making sound decisions.

The coalition further says "we will not just shut up and play to distract us from what this whole system has been about: Use and Abuse."

Irving's efforts are drawing considerable opposition, but not from people opposed to social justice activism. LeBron James wants to play. ESPN's Michael Wilbon says athletes should never give up their platforms. TNT's Charles Barkley said it would be a "catastrophic mistake not to play." On ESPN's Get Up program, Kendrick Perkins said Irving is bird-brained for urging players to stay home. ESPN First Take's Max Kellerman said it's best for the season to resume so players can use their platforms for social justice. Stephen A. Smith said Irving is undermining the NBA players union and losing support from his own coalition.

None of these people are talking about the perspective of the fans who buy tickets or watch sports from their homes. Fans have definitely been missing sports during the pandemic, but it's becoming a matter of being careful what you wish for. Will fans welcome the return of sports that become side stories to athletes kneeling in protest? And side stories to athletes standing for social justice activism with no end in sight?