Team USA's 13-0 women's World Cup soccer thrashing of Thailand Tuesday got a heavy infusion of politics from the media. U.S. midfielder Megan Rapinoe refused to honor America during the pre-game national anthem, as a critique of President Donald Trump, and USA Today referred to the president as a "misogynist" after he declined to discuss the team's quest for equal pay.

Controversy descended on the field before the match even started when Rapinoe (seen at far right in photo) stood as the only American player without her hand over her heart, eyes focused on the flag and singing the Star Spangled Banner.

In May, she promised the protest, saying: "So it's kind of a good ‘F you' to any sort of inequality or bad sentiments that the [Trump] administration might have towards people who don't look exactly like him. Which, God help us if we all looked like him. Scary. Really scary. Ahh, disturbing." Rapinoe had also told Sports Illustrated she wouldn’t attend any White House celebration if the team repeated as World Cup champion. 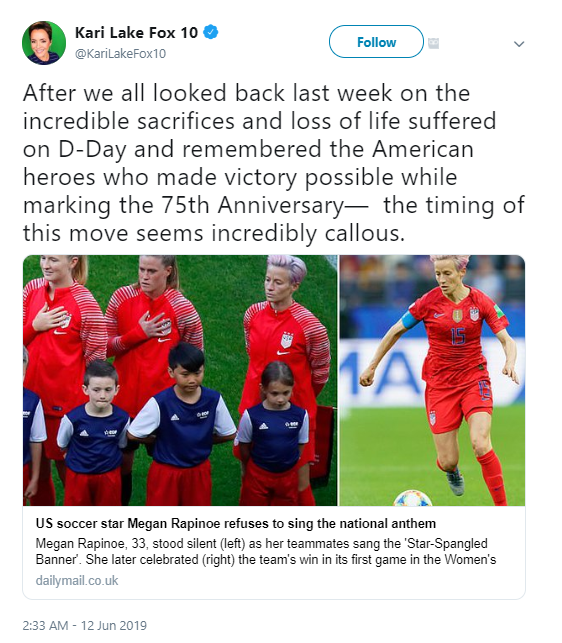 Another tweeter wrote in support of Rapinoe: "So brave. A star of the U.S. Women's soccer team kept her promise to ignore the celebration of the national anthem as an 'f-you' to President Donald Trump."

NBC News' Peter Alexander asked President Trump about the team's lopsided victory and its lawsuit against U.S. Soccer for pay equal to men. "Big win," and "We'll talk about that later," the president responded. That only angered a big critic of his, USA Today sports columnist Nancy Armour.

"When is later, exactly?" Armour asked in a Wednesday column. "Not exactly ground-breaking stuff there. ... The answer was hardly a surprise, given Trump’s well-established history of misogyny and disdain for anything that doesn’t directly benefit him. But that attitude, so patronizing and infuriating, is why the women felt compelled to file their lawsuit in March, just three months before the biggest tournament of their careers."

Armour wrote, "Women recognize that 'later' is simply code for more broken promises. That promotion, that raise, that title, that recognition – it’s never going to come, but we’ll keep stringing you along to keep you quiet."

Counselor to the president Kellyanne Conway praised the American team and said its success shouldn't be marred by politics. The Hill's Rachel Frazin quoted her saying, "We're very proud of their athletic achievement. But stop trying to politicize really great events like women's soccer."