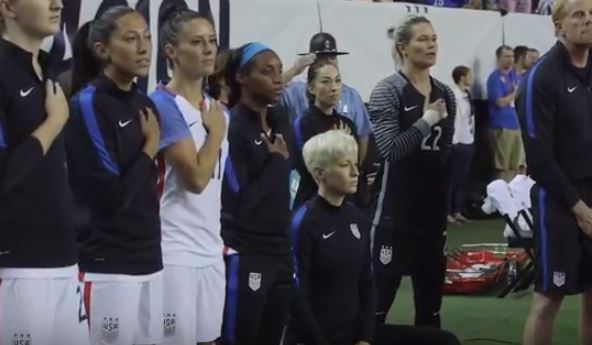 Lesbian and ESPN The Magazine Body issue model Megan Rapinoe is taking the SJW baton from Colin Kaepernick and giving President Donald Trump an ongoing middle finger. A pro soccer star and member of the U.S. National Team, Rapinoe tells Yahoo Sports's Henry Bushnell her play will serve as an “F you” to the Trump administration.

Inspired by the radicalism of Kaepernick, Rapinoe (seen kneeling in 2016 photo) was the first female athlete to take a knee during pre-game renditions of the national anthem. She did that as a member of Seattle's Reign FC and once for the U.S. national team's game, but the U.S. Federation immediately moved to disallow further shows of disrespect.

No matter for Rapinoe, a far-left activist and Hillary Clinton supporter, who now says she doesn't need to kneel to defy the president:

I feel like it's kind of defiance in and of itself to just be who I am and wear the jersey, and represent it. Because I'm as talented as I am, I get to be here, you don't get to tell me if I can be here or not. So it's kind of a good ‘F you' to any sort of inequality or bad sentiments that the [Trump] administration might have towards people who don't look exactly like him. Which, God help us if we all looked like him. Scary. Really scary. Ahh, disturbing.

Rapinoe will represent a government she believes enables injustice and a president she calls “sexist,” “misogynistic,” “small-minded,” “racist” and “not a good person.” She says she feels “like I'm a walking protest." Bushnell was a fan, calling her “[t]he most courageous, open-minded social justice warrior American soccer has ever known" and views Kaepernick's social justice protest “extremely inspiring and convicting.” She assumes she's always had a “natural activist strain.”

The Trump administration does not “value all Americans equally,” and the U.S. is plagued by “atrocities...extreme poverty...homelessness...mass incarceration...discrimination against people of color, and police brutality,” Rapinoe says.

Previously, Rapinoe sang along to the Star-Spangled Banner, but within days of Kaepernick's first protest, the soccer player also began kneeling. “The whole meaning of [the anthem],” she says, “changed dramatically” for her. It is now a “somber moment” for a “peaceful protest.”

Before a road game at Washington in 2016, the host Spirit circumvented her protest by playing the anthem before the teams took the field. Rapinoe called it “f------ unbelievable.” Then before she appeared in a game for the U.S. national team, she knelt. U.S. Soccer quickly shut down such protests.