An intolerant media voice is urging the rainbow-themed, LGBT-dominant U.S. National Women's 'Lesbian' Soccer Team to give the boot to a new Christian player. Christina Cauterucci's Slate.com headline spares no mercy for the "poisonous" Christian "bigot" Jaelene Hinkle, encouraging the team to: "Kick Her Off."

The U.S. National Women's 'Lesbian' Team is preparing for the "friendly" Tournament of Nations, but Cauterucci couldn't be more unfriendly to Hinkle.

The lesbian team is coached by a married lesbian, Jill Ellis. The face of the national team in recent years has been lesbians Megan Rapinoe and Abby Wambach. The team's lesbian orthodoxy is further enforced by rainbow-themed uniform numbers. That makes Hinkle an undesired "heretic" to hostile media and fans.

On an Instagram post, Hinkle posted an image that turned the Human Rights Campaign’s red equality symbol into a cross, with the message:

"The rainbow was a convent made between God and all his creation that never again would the world be flooded as it was when He destroyed the world during Noah's time. It's a constant reminder that no matter how corrupt this world becomes, He will never leave us or forsake us. Thank you Lord for your amazing grace, even during times of trial and confusion. " 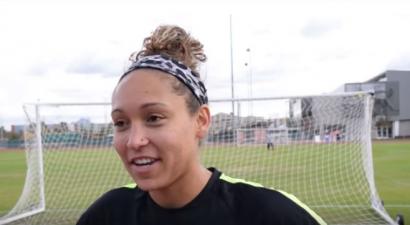 Hinkle declined an invitation to join the team three years ago, explaining on The 700 Club that she knew in her spirit that she was doing the right thing by being obedient to God.

Cauterucci didn't want Hinkle (photographed at right) on the team, but played it both ways — hypocritically accusing her of letting down the national team by refusing to play and accusing her of insulting "gay and queer women, some of whom are the sport’s best players and most devoted fans." But a few days ago, Coach Ellis added Hinkle to the team, stirring up the LGBT smear machine anew. Cauterucci wrote: "If fans and big-name players decide they can’t abide Hinkle’s anti-gay mission, they need to start speaking out."

In accepting her spot on the team, Hinkle tweeted: "God is good! Honored. Excited. Ready.” Cauterucci attacked her Christian values, writing that she'll train alongside the lesbian Rapinoe (one of the "stars" of ESPN's recent nude athlete gallery) "and possibly many other queer players. Hinkle’s addition to the team sends a tacit message to her teammates and the USWNT’s fans: Players with poisonous views are welcome here, so long as they help us win."

Hinkle’s addition to the team is also "a workplace issue in addition to a moral one," Cauterucci moralizes. The Christian bigot is "telling her colleagues that their lives and loves repulsed her ... ." And believe it or not the rainbow-themed uniform is not connected to LGBT rights! "It was merely a symbol of goodwill Hinkle could have worn to demonstrate her support for her teammates’ well-being without making any commentary on their legal rights. That apparently was too much for her to bear." Cauterucci pressed the attack:

"By allowing Hinkle on the roster, Ellis and U.S. Soccer are compromising the unity that’s essential for any good team and snubbing a not-insignificant segment of their customer base. The position we as LGBTQ soccer fans are being put in here is to have to choose between two aspects of our identities: our Americanness … and our queerness,” wrote Katelyn Best at Outsports. “Which is ultimately more important? Can I cheer for the U.S. to win another World Cup even with a player who doesn’t think I deserve love and acceptance for who I am on the field?”

Best accused "Team Queer America" of "selling out its LGBTQ fans and employees for a possible trophy."

Cauterucci closed her rant with a loud call to Wambach — " you big gay all-time leading goal scorer" — to start speaking out and start encouraging the team's LGBT fans to boycott Tournament of Nations. "Maybe U.S. Soccer will change its mind about Hinkle once it realizes that nurturing outspoken homophobia in a very queer sport isn’t just bad for morale — it’s bad for business."