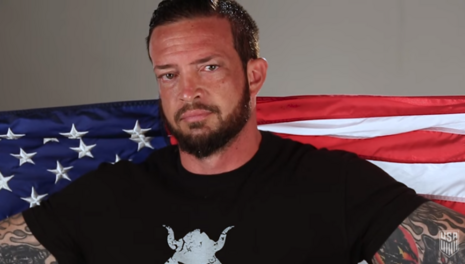 The federation’s Athlete Council expelled member Seth Jahn on Sunday after he spoke out and opposed repealing a policy that prohibited players from kneeling during the national anthem at all Federation events. Although Jahn was not the only member to speak out against abolishing the policy, he was by far the most outspoken.

Jahn addressed the link between kneeling and BLM’s false narratives on police brutality calling black deaths at the hands of law enforcement a “statistical anomaly.” He cited that “95% of deaths in black communities come at the hands of another black man.” As someone who is also part Native American, Jahn mentioned that he has similarly experienced intraracial violence within the native community because he is part white.

He went on to assert that leftists should stop treating slavery as a thing of the past that only black Americans ever experienced and only white people ever inflicted. “I keep hearing how our country was founded on the backs of slaves, even though approximately only 8% of the entire population even owned slaves,” he said. “Every race in the history of mankind has been enslaved by another demographic at some point time.”

As an Army Special Operations veteran and Counter-child Sex Trafficking Operative, the Paralympian has even seen modern-day slavery up close. In Saturday’s meeting, he explained that when he lived in Africa he witnessed the slaves being sold for $300 to $800 depending on their physical capabilities. “Where were the social justice warriors and the news journalists there to bring their ruminations to these these real atrocities?” he said.

And yet in all of history, only one country has fought to abolish slavery, the United States of America, where nearly 400,000 men died to fight for the abolishment of slavery underneath the same stars and bars that our athletes take a knee for. Their sacrifice is tainted with every knee that touches the ground.

He suggested that instead of kneeling players should use their personal platforms to protest racism. That way they can send their message while not representing the whole U.S. and the Federation internationally.

These statements that should be relatively uncontroversial garnered a lot of controversy among fellow council members and soccer fans who watched meeting playback. Yahoo!sports even called his remarks “racist and white supremacist talking points.” Jahn claims he and his family received over 40 death threats because he shared his experience, his opinion, and a few facts.

He responded with a good ol’ sorry not sorry kind of  “apology.” “I will never apologize for the statements I made and will never bow down to the mob mentality of intimidation, bullying or the social media warrior’s gestapo tactics,” Jahn writes. “I’m embarrassed to represent a hypocritical federation that conducts a complete assault on diversity of thought without even seeking clarifying statements from me in their smear campaign.”

He also clarified that he “was in no way minimizing the horrors of slavery” but rather was “illuminating the misplaced rage and squandered opportunities to bring to light the tens of millions of people who are enslaved TODAY...more so than at any point in history.”

While Jahn said nothing truly offensive the Athlete’s Council voted to remove him from their ranks because his remarks qualified as harassment and violated the Federation’s “Prohibited Conduct Policy”. What the council fails to mention however is the fact that the conduct policy is worded broadly enough to cover any “verbal, written or physical act” in which race or national origin “is used in a manner which would make a reasonable person uncomfortable.” In the era of safe spaces and microaggressions the world is short on reasonable people and the policy could apply to just about anything remotely offensive to literally anyone.