MSNBC's Obeidallah: Pro-Lifers Are Hypocrites For Defending Women From Taliban 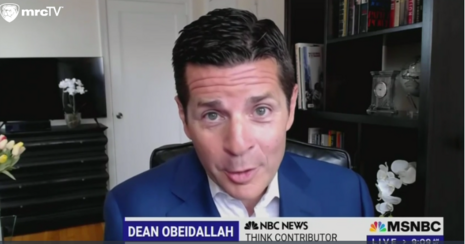 According to the kooks at MSNBC, Republicans have no right to talk about defending the rights of Afghan women from the bloodthirsty and female-enslaving Taliban regime because they don’t respect American women’s bodily autonomy.

In other words, we tell women they can’t abort their own innocent babies and that’s practically on the same level as the Taliban treating women like cattle – well, at least in the strange, hyperbolic mind of lawyer and MSNBC opinion columnist Dean Obeidallah.

In an op-ed for the mainstream leftist outlet, Obeidallah just couldn’t take the supposed hypocrisy of conservative lawmakers lamenting about the future of women and girls under the boot of the Taliban. He opened his piece with, “Over the last few days, the airwaves have been filled with Republicans voicing their deep concern over the rights of the women of Afghanistan.” As they should.

He added, “I have to wonder where these voices were when extremists, based on a narrow reading of their religion’s beliefs, enacted a law that forces a woman who was raped to carry the fetus of the rapist to term?” Here, Obeidallah was referencing an Arkansas state law just signed by Gov. Asa Hutchinson (R-AR) in March which he described as a “ban on abortion in all circumstances — except to save the life of the woman.”

But, let’s walk that back. First of all, these Republican “extremists” that Obeidallah is complaining about want to preserve the innocent life of the unborn child, that should be protected by our Constitution as much as any other person is in the United States. It’s never been about restricting women – well, apart from restricting them from committing grievous evil. But, again, Obeidallah is making the oh-so-tired comparison of pro-lifers to murderous Islamists who have no regard for life whatsoever. It’s a disgusting smear.

Also, as far as his comment on being anti-abortion as coming from a “narrow reading” of religion, it’s a pretty clear and universal teaching from the Catholic Church – the oldest and most widespread Christian church – that abortion is a grave evil. Those Christian churches that allow abortion are the ones with a “narrow” and pretty much made-up reading. Laws to prevent a procedure that intentionally stops the beating of a human heart are also not based on religion, but on science and biology.

And Obeidallah’s characterization of Gov. Hutchison’s new law as something that punishes women who are raped; what should the policy here be? Kill the kid because of the way he was conceived? Sure, it may be a tragic situation, but it only begets more tragedy to kill the innocent life that resulted. And, again, back to a point made famously by Ben Shapiro, abortion in the case of rape only comprises an extremely small percentage of all abortions. So, let’s not act like the law was passed to punish those women.

Still, Obeidallah continued the same trite feminist BS, summing up his argument by mansplaining, “[W]e’ve seen Republicans champion measures to deprive women of freedom over their own bodies, as well as oppose laws to protect women from violence and ensure that women are paid the same wages as men.” Yeah, yeah, yeah. Just because conservatives aren’t up to embrace every tenet of modern feminism, doesn’t mean they can’t condemn the Taliban.

And yet Obeidallah wants abortion treated as a "guaranteed human right," demanding that we ignore the rape and murder happening in Afghanistan at this very moment because the Supreme Court could hypothetically return abortion law back to the states at the end of the year:

If the GOP wants to show that it is sincerely concerned with the rights of the women in Afghanistan, it can start by first championing the human rights of women in the U.S. But instead, it is doing all it can to prevent gender equality while oppressing women based on its members’ extreme religious beliefs. Sound familiar?

No. In fact, tearing apart a human body limb from limb, as is done in abortion procedures, sounds more like something the Taliban does to its enemies. So, maybe it's the pro-aborts who should be the ones condemned as being Taliban-like.