‘NO ESCAPING IT’: LGBTQ Group Taunts Parents With Song, ‘We’ll Convert Your Children’

LGBTQ activists know that parents are on to them. Mom and Dad have seen the propaganda in Sesame Street, the Gay Pride parades in Blues Clues, the far too many drag queens showing their two-year-olds how to “twerk,” and they are done with people teaching innocent children about weird sex stuff. But the activists aren’t hiding or scrambling to retrofit their grotesque messaging - instead, they're rubbing it in conservative parents' noses. 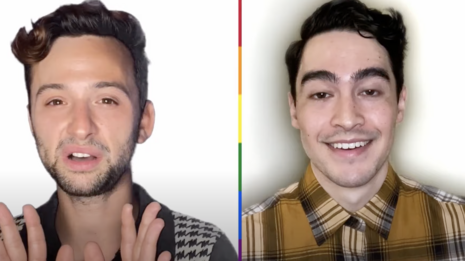 To start it all off, one of the choir’s performers gave the song a quick intro, saying, "As we celebrate Pride and the progress we’ve made over these past years, there’s still work to be done. So to those of you out there who are still working against equal rights, we have a message for you.”

Sure, one could guess that this was going to be more LGBTQ propaganda. But viewers probably had no idea how shameful and nefarious the song was going to be.

One young, smug gay entertainer began singing: “You think we’re sinful. You fight against our rights, you say we all lead lives you can’t respect. But you’re just frightened, you think that we’ll corrupt your kids, if our agenda goes unchecked.”

(Though, in our defense, we have seen a Pride month this year featuring LGBTQ propaganda aimed at kids and even toddlers, so it’s a legitimate concern.)

And, as if to validate that concern, the choir members segued into their song’s creepy chorus: “Fine — just this once, you’re correct. We’ll convert your children. Happens bit by bit. Quietly and suddenly, and you will barely notice it.”

Oh really now? They’re not even trying to hide it anymore, are they? It seems this was the Pride Month where the mask truly slipped.

In the second verse, the choir riffed on children being lured out of their parents’ protection and indulging in the LGBTQ+-friendly world, crooning: “Just like you worried, they’ll change their group of friends. You won’t approve of where they go at night.” Um, come again? Though the second singer chimed in, clarifying they’d be going out at night “to protest.” Oh nice save, guys. Still, we get the innuendo here.

They continued, “Oh and you’ll be disgusted, when they start finding things online that you’ve kept far from their sight. Like information.” though they reassured parents not to be too alarmed because it won’t hurt anybody. “Guess what, you’ll still be alright,” they sang, adding in another gross chorus: “We’ll convert your children, yes we will. Reaching one and all. There’s no really no escaping it cause even grandma likes ‘RuPaul.’”

Of course, the video was hit with backlash almost immediately upon its release. It generated a wave of headlines and controversy big enough to encourage the uploaders to remove it from the public’s view on YouTube. Thankfully, The American Conservative provided a link to someone who reposted it for posterity’s sake. This is what the LGBTQ movement is doing and everyone needs to be aware.