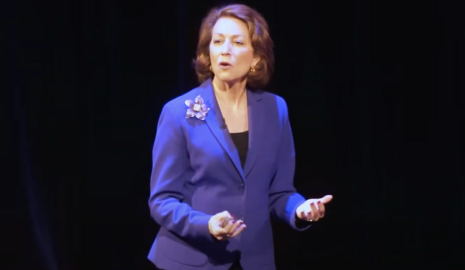 The premier world wildlife, science and history publication National Geographic seems to be succumbing to the woke mind virus. Well, senior staff at the famous magazine are, at least. According to one conservative commentator, Editor in Chief Susan Goldberg sent out a mass email from the magazine over the weekend in which she denounced her own “white” “privilege.”

Now that’s what you call a “humblebrag.”

But, yes, Susan Goldberg, the head editor of National Geographic and the first woman to have ever held that position at the prestigious left-wing rag, added an extra line to her signature in a National Geographic email which denoted not her pronouns but her radical racial wokeness.

Conservative commentator and author Rod Dreher posted a screenshot of the end of "insufferable elite" Goldberg’s email to Twitter on June 7, which concluded, “I hope you’ll join us in this conversation – and as a subscriber to National Geographic.” Though, recipients of the email would have to be pretty unfazed by woke insanity to want to continue to subscribe after seeing her send off. Goldberg closed out her email with her name, occupation, and “race card.”

It said, “Susan Goldberg, Editor in Chief, National Geographic, Race Card: White, privileged, with much to learn.” Oh, yeah, “race card.” That info is truly as essential in a signature as an email address or phone number.

From a mass email the editor of National Geographic sent out. America surely has the most insufferable elite. pic.twitter.com/hjL7w4IQ0h

But, yes, that was really the case. It seems as if Nat Geo’s editor is trying to get this to be a trending thing, where we all have to disclose the color of our skin in emails, hell, maybe even on business cards in the future. That way we’ll all know the level of each person in the victimhood caste.

Perhaps Goldberg thinks that if she denounces her privilege, no one will question her cushy job at the magazine where they take all those exploitative pictures of African natives.

No, we aren’t accusing Nat Geo of that, but perhaps if some purple-haired BLM activist saw Goldberg’s signature and they would be placated from demanding her ouster, right? That’s got to be some of Goldberg’s rationale.

Of course, other Twitter users blasted Goldberg over the disgusting virtue signal. Manhattan Institute Senior Fellow and prominent critical race theory critic, Chris Rufo, slammed Goldberg’s tweet as well. Responding to Dreher’s screenshot, he wrote, “They are turning parody into reality.” Yeah. You have to wonder. How can it be that a sophisticated, cultural staple like Nat Geo thinks objectifying people based on race isn’t braindead?

Senior Political Analyst at Fox News Brit Hume retweeted the screenshot and provided a caption, which said, "'Much to learn' seems spot-on though." Yeah, take that, Goldberg.

Another user, psychology professor and author Geoffrey Miller, responded, saying, “If she's ashamed of her race, her class, and her ignorance, maybe she should resign.” Well, probably. That would at least prove she’s committed to social justice and not just some poser looking to benefit from some cheap liberal platitudes.