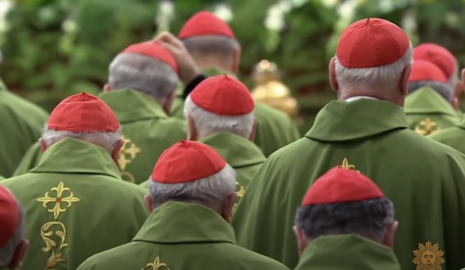 CBS Sunday Morning host Jane Pauley introduced the story about gay priests on March 28, explaining that the Vatican recently declared their refusal to praise people for homosexual acts, though at the same time, many gay priests are “coming out of the shadows.” Pauley even seemed proud when she acknowledged that this gossip was dropping just in time for Palm Sunday.

The segment, helmed by reporter Seth Doane – who is in a same-sex union – began with a conversation with a “gay” Catholic  priest from Milwaukee, who had come out to his parish when he was 51 years old. The gentleman referred to himself as member of the LGBTQ community and talked to Doane about opposition that he and the gay community face.

But don’t let that fool you. Father Greg Greitens is “out” but was shown telling his congregation that he is a “celibate” priest. That’s worth noting. The Catholic church DOES NOT care about sexual orientation. The Catholic Church DOES condemn sexual activity outside of the marital context, and homosexuality happens to be an extreme form of that. Priests have to take a vow of celibacy.

Still the conversation moved right on into the “stigma” he has faced because for years before coming out he felt uncomfortable to express his “identity” as a Catholic priest. And CBS went along with spinning his situation as the Church denying who he was, and making him stay silent about it.

Doane then interviewed an anonymous priest facing the stigma of his “double life” as gay and being a priest amidst what he called the “slow-moving cancer” that was the Vatican’s view of homosexuality. Though he admitted he engaged in homosexual acts as a priest. OK so he didn’t live up the vows he made and he’s the victim?

Still CBS brought out gay activist Fr. James Martin. The Jesuit, who believes that Church teaching on homosexual sin being disordered is “objectively disordered,” told Doane that the Church needed to “change its thinking” on the issue of homosexual priests. Of course, no alternative view was presented by the network whatsoever.

Doane then interviewed French author Frédéric Martel who fiendishly referred to the Vatican as “50 shades of gay” in terms of how prevalent homosexuality is in the Vatican. He also said that gays make up the “largest” identity group within the Church. Again CBS took that at face value.

But the lowest point of this journalistic farce came when CBS spoke with Francesco Mangiacapra, a “sex worker with a law degree” who admitted of sleeping with “100 hundred” priests. Of course this was taken seriously and without pushback from the network. Though when CBS' nastiest digs against Holy Mother Church come from a salacious game of kiss and tell, you know they’re desperate.