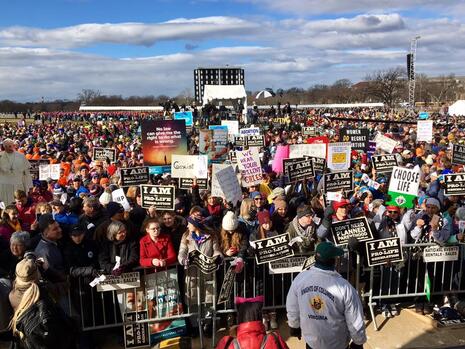 Vice’s latest anti-life piece is proof that last week’s Capitol riot is a one-smear-fits-all bad PR event being used by the left to condemn all of its political enemies.

This time the hipster, soyboy lefty outlet is associating the entire anti-abortion movement with with the few identifiable anti-abortion activists who stormed the Capitol building on January 6. They want to convince readers that pro-lifers are in league with a “white supremacist” insurrection.

But again, we had to hear from the left all Summer, that violent BLM/Antifa protesters did not represent the millions of peaceful protesters who stood for racial justice.

The ridiculous piece, written by Vice’s Carter Sherman, cherrypicked several pro-life Trump supporters who committed crimes by entering the Capitol and tried to pin their guilt to the other peaceful pro-lifers and their families who attended the -- yes -- mostly peaceful protest and further extrapolated that guilt to potentially millions of pro-life Trump supporters in the country.

Of course, Sherman’s piece began right at the heart of the riot on Wednesday, in the midst of the criminal few who broke off from the Trump rally and stormed the building. “When a single shot rang out during the Capitol riot and struck Ashli Babbitt, anti-abortion activist Tayler Hansen was filming,” he wrote. That’s pretty much the sophistication of the entire argument right there.

But of course, the sophistry had to win out over the truth, so Sherman devoted several hundred more words to showing that this was an insurrection populated by pro-lifers big and small. The author mentioned pro-life champion Abby Johnson’s attendance at the Capitol protest as if it was some final nail in the coffin of the argument that unborn children should’t be killed.

He wrote, “Abby Johnson, one of the nation’s highest-profile anti-abortion activists, also showed up in D.C. that day. She tweeted an image of herself at the Trump rally that preceded the invasion of the heart of American democracy.” Oh right. She attended the rally and was proud of it. What crime should we arrest her for? Supporting a president who fought for her values, or for being in a crowd of more than 100,000 peaceful people from which a minority of jackasses broke away to riot?

Granted, Sherman tried to incriminate Johnson via her Facebook claim that she “got a little bit of pepper spray in my lungs.” So she made it close to the Capitol along with thousands of other people. So what? At the worst, she expressed her constitutional right to protest and caught some pepper spray which lingered in the air. This isn’t enough to charge a pro-life leader with “insurrection.”

The author used several other examples of pro-lifers who were part of the event, even some who broke into the building, to make the collective smear. He mentioned one “who live-streamed a video of himself, helmet-clad, urging the rioters to break into the building,” and provided the example of John Brockhoeft’s attendance at the rally. Brockhoeft is the individual “who was convicted of firebombing an Ohio abortion clinic.”

So because criminals who happen to be pro-life were at the rally, that means the whole pro-life movement is a collection of similar dregs of society? That’s stupid. The left sure loves its guilt by association game, BUT only when dealing with conservatives. Otherwise, according to them you should never judge a group by its worst actors.