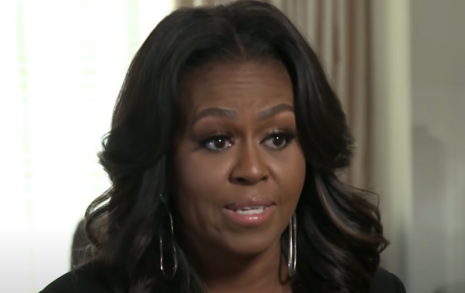 Michelle Obama may be many things, a mega-millionaire, emerging media personality, bestselling author and former White House resident, but complete happiness has been eluding her lately, and shocker, it’s because of a certain sitting president.

During the latest episode of her fancy new Spotify podcast, the former first lady told her guest that President Trump has given her a mild bout of “depression” due to his unrelenting “hypocrisy.”

Cue up the melancholic violins for this Zoloft-sponsored performance of “Orange Man Bad.”

During the August 5 episode of The Michelle Obama Podcast, Obama talked with Washington Post opinion columnist Michelle Norris about her feelings regarding current events like the Chinese virus and the Black Lives Matter protests.

Mrs. Obama got personal with Norris, telling her that lately her sleep has been a bit off and that she feels a little glum due to all the chaos and unrest in the world. “There have been periods throughout this quarantine that I have just felt too low,” Obama told the columnist, adding that on several occasions she has had to “surrender” to her negative feelings and just accept maybe she’s not going to do that workout today. “I’ve gone through those emotional highs and lows that everybody feels, where you just don’t feel yourself,” she claimed.

Tough stuff, man. Though Michelle then made the point that the current politics have been messing with her mojo. “Spiritually, these are not – they are not fulfilling times,” she declared to her guest.

“So I know that I am dealing with some form of low-grade depression, not just because of the quarantine, but because of the racial strife and seeing this administration, watching the hypocrisy day in, day out, is just dispiriting.”

Oh and there it is. Though when it comes to helping along some of her depression for the racial strife, she could look at some crime stats to reassure herself that cops aren’t out hunting black people, or take a breather and realize that America isn’t an inherently racist country, as the left/BLM wants us all to believe. As far as the Trump problem goes, well she might have to sit tight.

“So I’ve kind of had to give myself that,” Mrs. Obama stated, demonstrating that she’s allowing herself to feel “dispirited” over Trump and racism that’s not really occurring. Again. Isn’t that wonderful? America is under assault from vicious lies about its character and a street mob physically enforcing them. But rather than Michelle seeking the balanced approach, she’s letting leftwing talking points encourage her depression. How is this Trump’s fault exactly?