Over the weekend HBO’s John Oliver addressed the issue of Americans’ lack of historical knowledge. No not that people have an inadequate sense of what makes this country great, but that people haven’t been taught how “white supremacist” the country is. 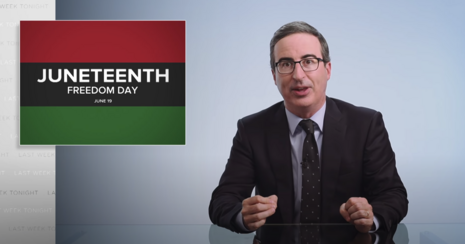 HBO’s Last Week Tonight, which features that smarmy, condescending nerd from across the pond, decided to jump in on all the racial politics that the radical left is foisting upon the country for the sake of social, (and electoral change). Since it’s BLM season, Oliver’s show gave Americans yet another lecture on how we haven’t taken white supremacy seriously in teaching our history.

“With so many people misunderstanding our history, either by accident or very much on purpose, we thought tonight it might be a good idea to talk about how the history of race in America is currently taught in schools,” Oliver claimed. Certainly, the American education system is a shambles, but it’s not for a lack of disparaging America.

Oliver provided three reasons why American history the way it’s currently taught is bad. The first he claimed, is that “we don't fully acknowledge white supremacy.” He added that the U.S. constitution needs to be taught as “revolutionary and racist,” because of historical blights like the “three-fifths clause,” a wrong that was long ago addressed.

The second reason is that Americans are taught “history's progress as if it was constant and inevitable.” Actually, that’s what progressives believe. The rest of us understand the fallen, imperfectible nature of humanity. The Civil War ended slavery, but it took 100 years for blacks to achieve equal treatment.

You can argue that those 100 years prove white supremacy and should be characterized as such in history classes. But you can also argue that not too long ago, we could trust most students to draw the logical conclusion that if the Civil Rights movement was necessary a century after the end of slavery, conditions for for blacks during that those 10 decades were bad. Maybe students aren’t up to figuring that out these days. Or maybe Oliver just wants lessons to bludgeon kids with more explicit anti-American statements.

The third reason Oliver named, is that “we don't connect the dots to the present,” which he explained in the sense that we don’t fixate on how “white supremacy, instead of disappearing, merely adapted” since the 1960s. Assumedly he knows that because he can look into every white American’s soul and see the racism.

Right. We shouldn’t refresh ourselves on the historical significance of legal and social strides that have culminated in society where all men are equal in terms of the God-given rights our government only exists to protect. Nor should we educate ourselves on why or how a cultural moment that includes hating our flag and tearing down statues of our founders is dangerous. (The history of last century is full of reasons why.)

Rather, it means we amplify the guilt of our past sins, so that the left has a rationale for transforming the country.