National Public Radio continues to define itself in every way as a taxpayer-funded nest of leftism. NPR couldn’t just supportively report on the Occupy Wall Street protests. A fire-breathing spokeswoman for the "Occupy DC" protests against capitalism was also an NPR host.

Lisa Simeone was an NPR anchor for their weekend version of the newscast "All Things Considered" for a year and a half, from late 2000 to early 2002. Now this radical was leading protests as she hosted a radio documentary series called "Soundprint" and an arts show, "The World of Opera."

NPR's Michele Norris, an anchor on the evening newscast All Things Considered, will temporarily step down as anchor while her husband Broderick Johnson accepts a senior position with the Obama re-election campaign. She will keep reporting what NPR calls "signature pieces" for the show (but not on politics), and plans to return as co-anchor after the 2012 elections.

Norris recused herself without an announcement in 2004 when Johnson aided Kerry's congressional outreach, but not in 2008 when he was unpaid adviser to Obama’s campaign. In a message sent on Monday morning to NPR staff, Norris said:

On Thursday’s All Things Considered, NPR profiled conservative activist Grover Norquist, the head of Americans for Tax Reform. Michele Norris began: “In the debate over the debt ceiling, one person who has outsized influence is not actually at the negotiating table.” That might sound good to Norquist’s donors, but when liberal reporters accuse someone of “outsized influence,” it means “too much power for the good of the country.”

Reporter Ari Shapiro signaled hostility by strangely noting that Norquist’s “donor list is not public,” when that is true for almost every tax-exempt political group in Washington (not to mention NPR!):

Norris began by noting the Obama administration's "major reversal" in their decision to try Khalid Sheikh Mohammed and four other 9/11 suspects in military court. After playing a clip from Attorney General Holder's recent press conference, where he announced the move, the host turned to the correspondent and recounted how " in late 2009...Holder announced that these five conspirators will be tried in New York City in a civilian trial. So today's decision officially reverses that."

Temple-Raston, who conducted a sting operation against U.S. border agents earlier in 2011 by wearing a headscarf and posing as Muslim woman, mainly acted as stenographer for the attorney general, though she did acknowledge the mismanagement of the rollout for the civilian trials plan:

NPR's Michele Norris expressed the liberal skepticism of any tax incentive to spur job growth on Tuesday's All Things Considered during an interview of Intel CEO Paul Otellini. Otellini proposed a tax holiday for any company that built a new factory in the U.S. Norris replied, "Can this country afford that right now?"

NPR: Expecting Our Leaders to Be In 'Functional, Heterosexual, Child-Producing Unions Is Totally Archaic'

On Tuesday night's All Things Considered newscast, Michele Norris sadly relayed news of the Gore separation:  "The Gores had a storybook romance: college sweethearts, four beautiful children. Their playful affection energized the campaign trail. The concession was you don't make that kind of stuff up. The Gores' union became a model of stability in a hard-charging town where partnerships, even romantic ones, are sometimes seen as a matter of convenience."

Norris discussed the matter with Rebecca Traister of the liberal website Salon.com, who said she felt "ashamed" and "sort of silly having an investment in a couple that you don't know," and that's when the inevitable secular-left analysis began: traditional, monogamous, heterosexual, reproducing marriage is an archaic social construct:

TRAISTER: And so it is a little bit like mom and dad breaking up out of the blue, except they're not really our mom and dad - and I am aware of that, I just want to make clear.(Laughter)

NORRIS: In some ways is the presidency and the requirements that presidents have solid marriages, is that a bit out of step with larger society, where almost half of all marriages end in divorce?

NPR Pressed Rand Paul on 1964 Laws, But Couldn't Press Sestak on His 2009 Claim of a White House Bribe

Liberal media outlets were quick to pounce on the new Republican nominee for the U.S. Senate from Kentucky about his views on the Civil Rights Act of 1964, not just Rachel Maddow on MSNBC, but NPR All Things Considered anchor Robert Siegel on Wednesday night. The sharp questioning of Paul is a contrast with NPR's interview with Joe Sestak, the new Democrat Senate nominee in Pennsylvania in the same newscast.

NPR anchor Michele Norris glanced right past an important, newsworthy, unresolved issue in Sestak's race, from much more recent history: did the Obama White House bribe him with a job offer to stay out of the primary, as he claimed last year?

NORRIS: It's been reported that the White House at one point tried to get you to back away from this race. Who told you to back down?

NORRIS: And did that continue even after you started to gain on Arlen Specter? As proof that National Public Radio can't call anyone a liberal, when they decided to review Ralph Nader's new novel "Only the Super-rich Can Save Us!" on Monday evening's All Things Considered, anchor Michele Norris described him only as a "perennial presidential candidate and social critic." Book critic Alan Cheuse was not kind 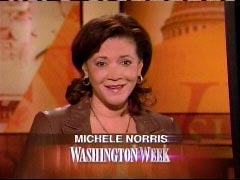 In addition to a sympathy tour on Oprah Winfrey’s show, Elizabeth Edwards was interviewed by National Public Radio on Thursday. But All Things Considered co-anchor Michele Norris deserves credit for channeling some of the resentment of voters – both Edwards voters and others – who feel defrauded not just by John, but by Elizabeth, who consented to completely fraudulent media stories celebrating her wedded bliss.