Rev. Franklin Graham is pushing back against lefties smearing his charity with accusations of homophobia in an effort to block the organization from administering to Coronavirus patients in New York City’s Central Park. 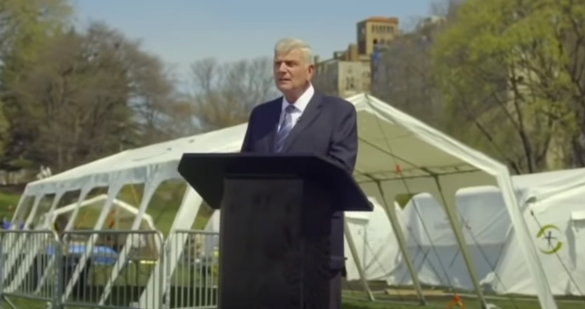 Host Laura Ingraham asked Graham, “Why are you being attacked for building a field hospital? What’s going on?” He explained, “We have a statement of faith, Laura, that marriage is between a man and a woman and that goes back to the beginning of time.” He added, “this is our standard for people that we hire. We’re a Christian organization, we’re a religious organization so we wanna hire people of like mind.”

A couple weeks ago, various lefties online moved to condemn the Christian charity for that “statement of faith.” Of course, LGBTQ groups can’t stand the very existence of folks or organizations with those beliefs and are trying to gin up a rap sheet of “discrimination” against Graham’s charity. The accusations have received enough traction that there are protestors at the Central Park camp and even Democratic Lawmakers like Bill De Blasio expressed he’d look into the behavior of Samaritan's Purse. Of course.

LGBTQ activist Natalie James of the Reclaim Pride Coalition stated in a recent New York Daily News piece, “We were promised there would be no discrimination by the notoriously anti-Islam, homophobic Samaritan’s Purse in its provision of services to desperately ill New Yorkers.”

On Fox, Ingraham asked, “You do not deny treatment or help to those based on their sexual orientation, correct?”

“That’s correct,” the pastor stated, explaining, “We have never discriminated ever based on sexual orientation, gender identity, race, religion or anything.” He added, “Now, we are Christians and we want a solid team of men and women that believe the same … but our help is unconditional regardless of what they believe or what they stand for.”

Apparently one of the instances of this so-called “discrimination” pro-gay groups complained about was when aspiring-volunteer Timothy Lunceford-Stevens didn’t get the postition, according to the outlet. “I told them that I was eager to do the work, even though I knew we had disagreements, but that I could not sign a ‘statement of faith’ that is homo-phobic.” So Mr. Lunceford-Stevens didn’t agree to the terms of employment? That’s the “discrimination” here?

Graham insisted, “As a Christian organization, we have the right to hire who we want and that’s just the law. We stay within the law and we abide by the law and it’s very unfortunate that these groups are distracting our team from helping people that we want to help.”

Sounds like the reverend’s first amendment rights are what's being discriminated against but that’s just the left for you. Talking to NBC News, Reclaim Pride Coalition’s Jay Walker asked, “How was this group ever considered to bring their hatred and their vitriol into our city at a time of crisis when our people are fighting a pandemic?”

He asks this as Samaritan’s Purse volunteers work around the clock to save lives in makeshift tents.