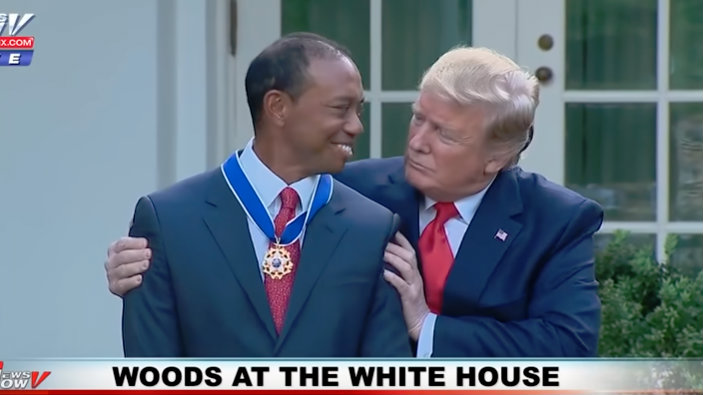 New York Times columnist Paul Krugman just can’t get one right these days. After blasting rural America as a bunch of backward racists, the bitter economist recently took to Twitter to voice his displeasure that President Trump awarded Tiger Woods with the Medal of Freedom, cheapening the honor by insinuating the Woods is a lame choice compared to all the important people receiving the honor before him.

On Monday May 6, Krugman tweeted a Reuters article about Tiger Woods receiving the Presidential Medal of Freedom for winning another Masters Tournament. The legendary athlete came back from a major, eleven year “career drought” filled with personal drama to win one of the most prestigious golf tournaments in the world. Trump saw fit to recognize his achievement with the highest civilian honor. He described Woods as “a global symbol of American excellence, devotion and drive.”

Considering the achievement, this was clearly fair, though Krugman was unamused. The hateful lefty captioned the article with his trademark pettiness. “I'm old enough to remember when Presidential Medals of Freedom were given for showing courage and making sacrifices on behalf of the nation and the world. Tiger Woods ... hits golf balls for money.”

Ah yes, because that’s all Woods’ journey has been about, but that’s beside the point. Krugman’s lame perspective seemed to indicate that the Obama honorees were the height of American “courage” and “sacrifice,” something conservative Twitter user @neontaster was quick to rebuke.

Neontaster blasted Krugman. He clarified: “Obama gave Medals of Freedom to Billie Jean King, Bob Dylan, Meryl Streep, James Taylor, Streisand, Gloria Estefan (and her husband), Springsteen, Diana Ross, De Niro, Ellen, and a few other borderliners like Spielberg.” So Woods hits “golf balls for money,” what are these heroes doing for our country, playing make believe in front of cameras for millions of dollars?

Of course neontaster is right, there’s no glory these recipients have that Woods doesn’t. In fact most of them are liberals who hate conservatives and slander them at every turn.

At the very least, Woods sticks to his work, and has risen to the occasion throughout tough times. That’s way more than can be said for Streep or De Niro, who lose all sense of human decency when they come into contact with different politics. Krugman is just a salty hater, and it seems he wants the world to know.