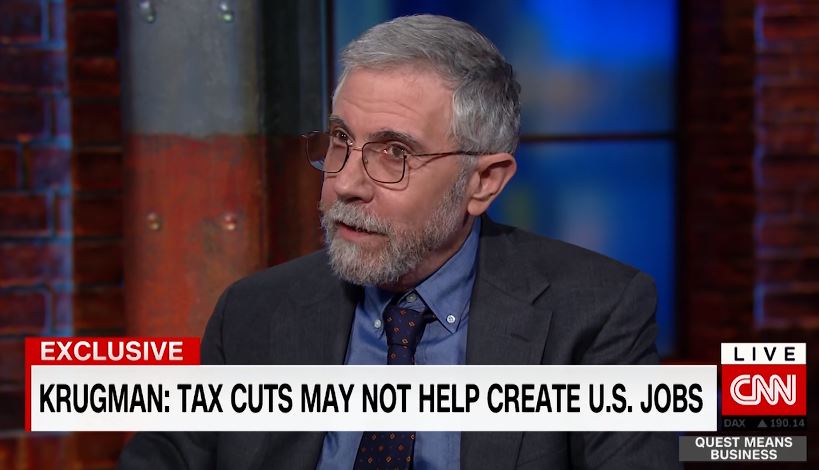 New York Times columnist Paul Krugman has given up on helping rural whites, judging from his Tuesday column, “Getting Real About Rural America.” The text box: “Nobody knows how to reverse the heartland’s decline.” It’s so bad in the heartland that not even social welfare programs can help, so why bother?

As you read this, Democratic presidential hopefuls are crisscrossing Iowa, trying to assure farmers that they share their concerns. Commentators are publishing opinion pieces about how Democrats can win back rural voters. Think tanks are issuing manifestoes about reviving heartland economies.

Krugman damned that emphasis with faint praise, before getting in a point about what he considers the unfairness of the Electoral College.

There’s nothing wrong with discussing these issues. Rural lives matter -- we’re all Americans, and deserve to share in the nation’s wealth. Rural votes matter even more; like it or not, our political system gives hugely disproportionate weight to less populous states, which are also generally states with relatively rural populations.

But it’s also important to get real. There are powerful forces behind the relative and in some cases absolute economic decline of rural America -- and the truth is that nobody knows how to reverse those forces.

The usual liberal answer is throw money at the problem, but the liberal Krugman has abruptly changed his tune, and expressed it in a passive-aggressive manner.

But reviving declining regions is really hard. Many countries have tried, but it’s difficult to find any convincing success stories.

.... the gravitational pull of big cities used to be counteracted by the need to locate farming where the good land was. In 1950 U.S. agriculture directly employed more than six million people; these farmers supported a network of small towns providing local services, and some of these small towns served as seeds around which various specialized industries grew.

Nor was farming the only activity giving people a reason to live far from major metropolitan areas. There were, for example, almost half a million coal miners.

Even then, rural areas and small towns weren’t the “real America,” somehow morally superior to the rest of us. But they were a major part of the demographic, social and cultural landscape.

Since then, however, while America’s population has doubled, the number of farmers has fallen by two-thirds. There are only around 50,000 coal miners...

Krugman doesn’t mention how stringent Democratic environmental policy has contributed to the loss of coal jobs. At least he didn’t suggest that laid-off miners “learn to code.”

He managed a few crocodile tears for rural Americans.

....Nowadays phenomena like the prevalence of jobless men in their prime working years, or worse yet, the surge in “deaths of despair” by drugs, alcohol or suicide are concentrated in declining rural areas.

Then he again slid in the knife against Trump-following rural nativists.

Not surprisingly, rural America is also pretty much the only place where Donald Trump remains popular; despite the damage his trade wars have done to the farm economy, his net approval is vastly higher in rural areas than it is in the rest of the country.

To strengthen his attack on rural Americans, Krugman hints that social welfare programs often do no good, an interesting perspective from a liberal economist.

But as I said, experience abroad isn’t encouraging. West Germany invested $1.7 trillion in an attempt to revive the former East Germany -- more than $100,000 per capita -- yet the region is still lagging, with many young people leaving.

Nor, realistically, can we expect aid to produce a political turnaround. Despite all that aid, in 2017 more than a quarter of East German men cast their ballots for the extreme-right, white nationalist Alternative for Germany.

I’m sure that some rural readers will be angered by everything I’ve just said, seeing it as typical big-city condescension. But that’s neither my intention nor the point. I’m simply trying to get real.....

Some previous examples of Krugman getting “real” with white, rural America: In November 2018 he went full Blue State snob, with “Senate America” as a stand in for Republican-leaning flyover country.

On Election Night 2016 he melted down on his blog, casting rural Americans as basically un-American for the crime of not voting for Hillary Clinton.

There turn out to be a huge number of people -- white people, living mainly in rural areas -- who don’t share at all our idea of what America is about. For them, it is about blood and soil, about traditional patriarchy and racial hierarchy....