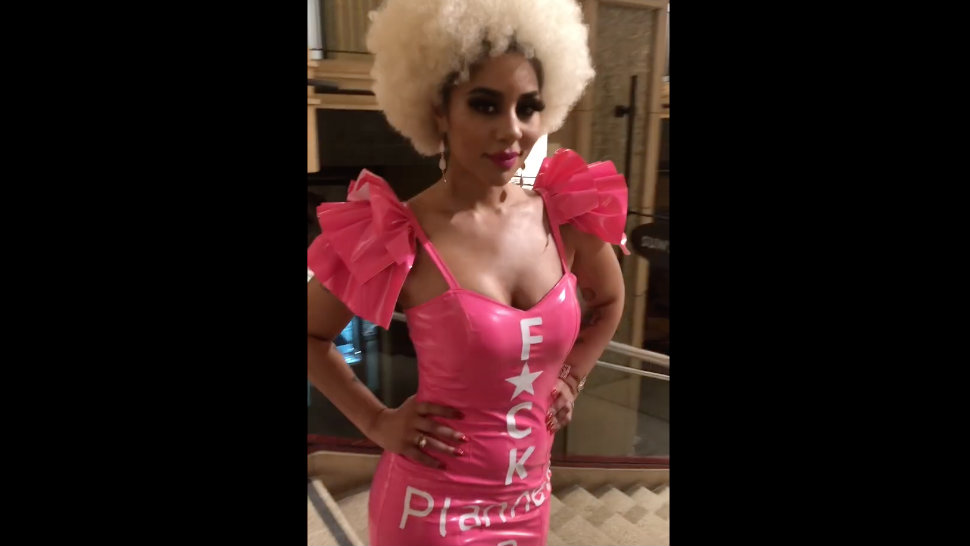 Never one to shy away from owning the libs, singer/songwriter Joy Villa turned heads at another red carpet with a new provocative style ensemble. At the premiere for pro-life/anti-Planned Parenthood movie Unplanned, Villa sported a hot pink latex dress emblazoned with the words “F**k Planned Parenthood.”

While her statement is vulgar, there’s only one thing to be said about the sentiment: Right on.

On Monday, Villa decided to turn up the pro-life heat, and what better way was there than to make a statement at the premiere of Unplanned, the highly controversial movie about the life and conversion of former Planned Parenthood employee, and now pro-life leader Abby Johnson.

Villa attended the red carpet dressed in a gown displaying the words “F**k Planned Parenthood” on the bodice and the movie title “Unplanned” on the dress’s flowing train. Villa described the process she went through in order to produce her style vision. “I told [Abby] Johnson I wanted to do a custom dress for the premiere because I wanted her to be in on it, because this is her film, her story, it’s very personal,” Villa claimed, adding that “It’s controversial enough to get people’s attention and it also is the underlying message of the film.”

Whether one finds the language offensive, Villa is tapping into a common sentiment about the “reproductive rights” organization. The way she sees it, PP is a fraudulent corporation that lies to women and kills babies. Villa mentioned that she tapped into that pink “girliness” with the dress, because that’s exactly how PP twists the sense of femininity in order to push their abortion mill agenda.

“Yes, I believe in women’s healthcare clinics, but abortion is not healthcare and Planned Parenthood has been pushing that and indoctrinating girls with pink and girliness. So that’s why my dress is hot pink and very girly.”

When asked about the controversy surrounding Unplanned’s R-rating, Villa didn’t bat an eye, saying, “I think it’s good … I think that an R rating makes it more notorious.” This followed reports of the film’s directors slamming the MPAA’s designated rating as having political motives.

Along with her music, Villa has become famous for making a Hollywood splash with her conservative views, bravely supporting the cause at high-profile red carpet events. She first grabbed political headlines in 2017, attending the Grammys in a dress that appeared cut straight from a 2016 Trump “Make America Great Again” campaign flag. For the 2018 Grammys, she wore a “Choose Life” dress featuring a picture of a baby in the womb, and in 2019 Villa hit the red carpet again with a white dress sporting the words “Build the Wall” in the style of the legendary Pink Floyd album “The Wall.” It was her display of conservative solidarity during the tumultuous emergency declaration border fight at the the beginning of the year.