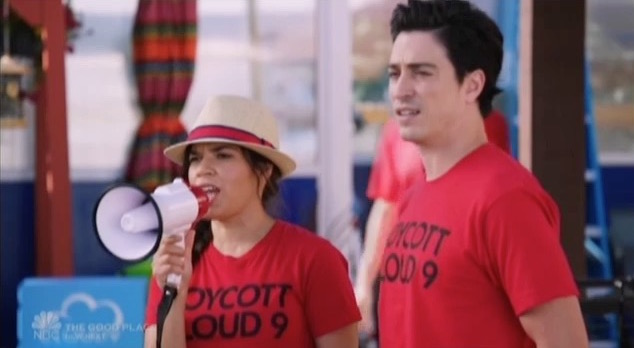 In its season two opener, NBC’s big box store comedy, Superstore, continued its sharp left turn left. At the end of the show’s first season, a majority of Cloud 9’s employees went on strike after the store manager was fired for “suspending” an employee, with pay, who had just given birth in the store because the corporate office had refused to offer maternity leave to its associates.

The show opens with employees demanding Glenn be reinstated. They increase their demands and go on strike because—in addition to the lack of maternity leave—Cloud 9 doesn’t pay its employees overtime or provide health insurance. In 20 minutes, the show went from a lighthearted comedy to bludgeoning viewers with ham-fisted messaging about how corporations are evil conglomerates that don’t care about their employees.

But the show didn’t completely jump the political shark until it worked in “transgender bathrooms,” an issue launched onto the national stage after the Charlotte, NC City Council voted to pass an ordinance banning gender-specific showers, locker rooms, and restrooms within city limits and Target announced it would open its women’s restrooms and changing rooms to men. The employees’ protest is quickly joined by Christians protesting the store’s open bathroom policy.

Ousted store manage Glenn clumsily tries to reassure his co-workers that “not all Christians are bigots,” just the ones leading the bathroom protest, while Garrett laments that the protester he was hitting on is now damaged goods. “I knew there had to be a catch,” he explains, “I just thought it would be something I could live with: like she’s just real stupid or something.”

Glenn: Look, I want you to know that not all Christians are bigots, okay? That one is. That's Maggie. She goes to my church. She thinks she's so great because she has a karaoke machine.
Jonah: Garrett, isn't that the girl you were talking to?
Garrett: Eh, I knew there had to be a catch. I just thought it'd be something I could live with, like she's just real stupid or something.

In the real world, Target stores have been the most vocal proponents of an open bathrooms policy. After numerous, embarrassing incidents of sexual predators abusing the policy to victimize women and children and a corresponding dip in the company’s stock price, the store announced it would be spending a whopping $20 million to add single stall facilities to its stores.

Amy tries to keep the strike going, but when the employees – including Glenn – are offered their jobs back if they sign an apology, they take it. One makes the very obvious point that their jobs are simple and they can easily be replaced by other workers. Then Garrett goes to talk to the “bigot” Nikki thinking if only she had “a cooler, more diverse group of friends” she would be enlightened. But Nikki manages to make a very convincing case…

Amy: No, no, hey, guys. They're not really gonna replace us! What are they gonna do, find someone who stocks go-backs like Mateo or who works the cash register like Elias?
Myrtle: Yes. Those are both very easy things to do.
Glenn: Scab!
Garrett: Hey, nik-nik-nikki. I had a quick just, like, silly question for you. Uh, how serious are you about all this sort of trans bathroom stuff?
Nikki: What do you mean?
Garrett: I mean, like, is it the only thing you think about or is it more like one of those barely talk about it, just how you were raised, opinion could change if you surrounded yourself with a cooler, more diverse group of friends type deals?
Nikki: No, I think it's pretty simple. I mean, you're born a gender. I think it's unnatural to try and change that.
Garrett: That's what I was afraid of. Hey--
Nikki: Think about it this way. Your brain doesn't make you a woman. Breasts make you a woman. You know, these make you a woman.
Garrett: You're not gonna make this easy on me, are you?

Yes, if only more of us were around more diverse, cool people, we would abandon our crazy ideas about science and biology. Thanks, Superstore, for abandoning comedy to educate us “bigots.”