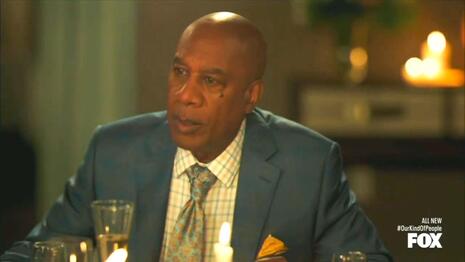 In the episode, "Crabs in a Gold Plated Barrel," on Tuesday, October 12, wealthy black businessman Teddy Franklin (Joe Morton) is preparing to purchase a fictional Boston sports team. He says he will lead the "team to victory by removing all the shackles of white ownership" and lets a player know, "You will never be told to leave your Blackness in the locker room."

Later in the episode, he and his daughter, Leah (Nadine Ellis), attend a dinner with one of the team owners, a white businessman named Bradley Clarke (Alpha Trivette), to discuss his plans to purchase a majority stake in the team. It is established early on during the dinner that Clarke is another caricatured white villain so popular on network television. Clarke awkwardly exclaims, "Our Teddy here outperformed us all last quarter. Can you believe it? Who says black lives don't matter, huh?" Then the conversation turns to Teddy's intent to attach the name of a Black Panther to his new venture.

Bradley: Of bigger concern is your plan to steer the franchise in a more political direction. And given the urban location of the stadium, your intent to forego millions in sponsorship just to name it after a Black Panther.

Teddy: My brother's community activism is a non-issue, and I have been nothing but transparent through this entire process.

Bradley: Well, unfortunately, the brands who endorse our team are concerned. So we found some new potential buyers with whom we feel a bit more comfortable.

Leah: MM. [ Scoffs ] Wow. I mean, you could put millions in their pockets, but they still only see your skin color.

Teddy: Well, I don't care how they see me. The point is how I see myself. And I've dealt with the... Bradley Clarkes of the world. Men who feel the need to uphold their whiteness, even if it means destroying lucrative business deals. It's a shame.

The Black Panther Party was a violent organization that described itself as "Marxists Leninist." In recent years, Hollywood has been working overtime to rehabilitate the image of this communist group. This has included the celebratory 2015 documentary The Black Panthers: Vanguard of the Revolution and the Oscar winning 2021 movie Judas and the Black Messiah.

Yet, Our Kind of People pretends criticizing the Black Panthers means that white men "still only see your skin color." Actually, if current Hollywood writers really did not want people to see skin color, they would be promoting the movement of Martin Luther King, Jr. Instead, they are attempting to resurrect a radical black supremacist movement that sought to violently destroy capitalism. Hollywood considers communists their kind of people.

This rant was brought to viewers in part by Zantac, Capitol One and Downy. You can fight back by letting these advertisers know what you think of them sponsoring such content.