Attacks on Cops Blamed on White Supremacists in CBS's S.W.A.T. 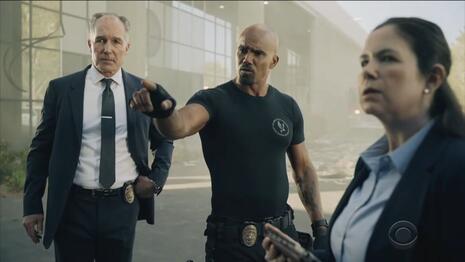 CBS's cop drama S.W.A.T. devoted the show's season finale,  'Veritas Vincint,' on Thursday, May 26, to a violent attack against a Los Angeles police station. For the first part of the episode, it looked like S.W.A.T. might be the only cop show this season (with the exception of Blue Bloods) to actually tackle the violence against police caused by Black Lives Matter radicals.

After S.W.A.T. Sergeant Hondo Harrelson (Shemar Moore) went public to the media about three racist cops that the L.A.P.D. refused to fire, the organization "Black Justice Now" (a clear stand-in for Black Lives Matter) took to the streets to protest police. Soon a local police station was bombed, leaving a police officer in serious condition. Camera footage showed BJN's leader was responsible and he was arrested.

His supporters went on social media and posted videos saying, "The boys in blue just snatched up our black messiah. It's time they burn. So y'all show up for war, you hear me." It looked for a moment like a television show might spotlight a BLM-inspired movement's violence against police.

But it turned out that the leader of Black Justice Now, Kevin Hilliard (W. Tré Davis), was wrongly framed by the Imperial Dukes, a white supremacist organization that hoped to start a race war and had already killed an officer named Erika (Lyndie Greenwood) earlier in the season. Hilliard and his group were innocent victims of a false flag meant to make them look bad.

Commander Hicks: The chief's sending out word that Kevin's no longer a suspect for the 27th Division bombing.

Hondo: It might be too late, sir. That false flag by the Imperial Dukes-- it's already got people looking at Kevin and his group as terrorists.

Deacon: At the same time, the Dukes have put cops everywhere on edge, and we don't know how many more attacks they have in the works.

Commander Hicks: Chief ordered the Academy to evacuate until Bomb Squad finishes a sweep. And we're sending alerts to every cop on patrol to be extra vigilant with safety protocols.

Deacon: This group is methodical. By bombing the 27th, they ... They redirected patrol routes, the allocation of manpower. They could be targeting cops anywhere in the city.

Commander Hicks: The Imperial Dukes went from attacks on individuals to crowds. After they killed Erika, we know dead cops don't bother them.

Hondo: They're chaos agents trying to tear down the system, starting with us, and if they open racial wounds, too, all the better for them.

Over 127 shows this season have pushed an anti-police, pro-BLM narrative, S.W.A.T. included. None of these shows has highlighted the toll taken on police officers in the U.S. by violent, left-wing radicals. Officers have been killed, held hostage in burning police stations and left paralyzed by real "chaos agents trying to tear down the system," but those chaos agents have primarily had names like BLM and Antifa.

As the episode began, I genuinely thought that S.W.A.T. would be one of the first shows to touch television's third-rail: BLM is a domestic terrorist organization that targets innocents, including innocent cops.

Instead, the show's writers took the coward's way out when highlighting violence and threats against officers. Within its fictional universe, it refused to hold to account the groups that have been most responsible for targeting police with violence.

Network television can try to gaslight the public all it wants about who poses the greatest threat right now to law and order, but polls show the public is not buying it. Support for Black Lives Matter has cratered within the past year. No amount of Hollywood scriptwriting can change that.

This S.W.A.T. rant was brought to viewers in part by AT&T, Febreze and Allstate. You can fight back by letting these advertisers know what you think of them sponsoring such content.