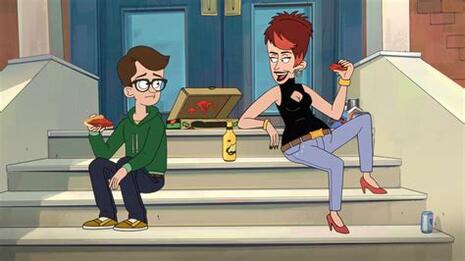 "Inspired" by a Twitter account portraying a degenerate middle-aged Chicago woman, the parody account was actually created by a male Netflix writer, not an aging aunt in Chicago.

The vulgar show slogs along with predictable jokes from the hard-partying Diane (Lauren Ash). It is the sort of show where characters use crude words like "queef" and slang like "BD" for "bar dick" - "Low-quality, you're not sure what you're putting up there, but it gets the job done," Diane explains.

In the series, Diane's respectable suburban sister, Bonnie (Jill Talley), decides to sell the city condo that she rents to the delinquent Diane. She gives Diane one week's notice to get out.

"Oh, that's plenty of time. I've gotten pregnant and un-pregnant in one week," Diane says. Yes, this show is so low it makes an abortion joke.

Diane's nephew Daniel (Rory O'Malley), openly homosexual, is a nerdy high school senior who gets excited about attending a video installation by the feminist and communist artist Hannah Black.

After Daniel graduates high school, he decides to take a gap year before attending college and convinces his mom to let Diane stay in the condo with him as her roommate. Shortly after the newly adult Daniel moves in, Diane decides to help him loosen up. For example, she gives him advice on how to make-out with strangers at a gay club for Halloween:

Diane: You gotta work on your game, my friend. You sound like Mitt Romney.

Daniel: Okay, instead of calling me hurtful names, can you give me some tips.

Daniel works at a hip, lefty juice bar. The owner of the bar tries to follow the new woke gender rules about saying "man" and "woman." But when both a man and a woman have the same name on an order, the owner is left with no choice but to whisper biological truths:

Nephew: I have a kale grail for...Zale?

Nephew: Was it a male Zale or a female Zale?

Owner: Daniel, hmmm, gender is a construct and you are legally not allowed to ask that question. [whispers] It was the guy.

The few black characters in this Netflix version of Chicago are primarily used just to insult Diane or white women in general. Diane's gay black boss, Gideon (RuPaul), makes comments about her race in relation to her irresponsibility. When Gideon lets Diane pass a corporate exam she did not actually complete so she can keep her job, he says, "Fine, she passes. Mm...mm...mm. To be a white woman in America."

After Diane accidentally outs him to his mother, Gideon rages at Diane about how she confused two black singers, Thelma Huston and Tina Turner. "It was Thelma Huston you dumb, white asshole," he yells at her.

Gideon has to kick Diane out of the corporate Christmas party when she breaks the rules and pops champagne. Diane's black co-worker, Tina, adds a race-based comment as Diane leaves.

Diane: It's three strikes and you're out.

Tina: And one if you're black.

As the above dialogue shows, this cartoon about a human train wreck is not particularly funny, just embarrassing. While it is is also not all that political, it includes one clear conservative in the series. He is a nasty, long-forgotten ex of Diane's. She visits him in the hospital in the final episode, 'Emergency Contact.' His character is so awful that he steals money from sick children. When Diane wishes him Merry Christmas, he yells, "You're damn right it's Merry Christmas. We're taking it back from the lamestream media libtards!"

The series continues Netflix's inexorable decline into the sewer with unfunny shows filled with hackneyed, nasty characters who leave you rolling your eyes and turning off the screen.