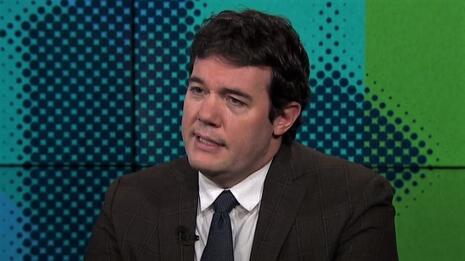 New York Times Patrick Healy, a former political reporter now the paper’s deputy Opinion editor, issued a strange piece as part of a special section on George Floyd on the anniversary of his death: “How Conservatives Think About George Floyd’s Death and BLM.”

Healy found another reason to lecture conservatives about how wrong they are about Black Lives Matter and the rioting and looting that accompanied anti-police protests in the summer of 2020. He couldn't possibly sit in on a focus group of Trump supporters without lecturing them as wrong-headed, both during the session itself and later in print:

As part of this coverage, I wanted to see if some conservative voters had shifted their thinking on Mr. Floyd and the continuing racial justice movement; Republican support for Black Lives Matter briefly rose after his death. I was curious to hear their views at a time when Americans are both divided and interdependent, when many people listen only to like-minded opinions and when systemic racism is an urgent issue for the entire society.

Healy claimed as fact the highly debatable and very liberal assertion that America suffers from “systemic racism,” something baked into the nation’s bones.

I decided to sit in on a focus group led by Frank Luntz, a longtime strategist for Republican candidates and a veteran of such discussions. He chose 14 conservative Trump supporters who reflected the Republican electorate: overwhelmingly white, evenly divided by gender, more old than young.

As is customary in focus groups, my role was not to argue with or fact-check the speakers. Mr. Luntz encouraged them to share candidly; several made false claims, including that the election was stolen and that Black Lives Matter is a Marxist or violent hate group. Many criticized the news media but were clearly shaped by it: Some kept overstating the scattered street violence last summer, which Fox News and other news outlets popular with conservatives regularly showed.

Are the Marxist foundations and policy positions of the political group that calls itself Black Lives Matter (as opposed to people who think “black lives matter”) really up for debate? The leaders describe themselves that way.

And is that the same “scattered street violence” that burned down buildings and resulted in $2 billion worth of paid insurance claims?

Healy regularly interjected himself into the focus group session, including this embarrassment:

It is a fact that the Black Lives Matter protests last summer in American cities were overwhelmingly peaceful. Do you disagree? That is a fact. In terms of the 26 million who marched through the [early] summer, there were not 26 million rioters.

“Overwhelmingly peaceful” is a weird way to talk about a protest. They would never talk about the peaceful protesters at the Capitol on January 6 like that overruled the rioting.

Yet the Times has used this bizarre formulation several times when talking about the often violent aftermaths of the protests. An April 2021 story sounded particularly pathetic in its defensiveness:

….The overwhelming majority of last summer’s nationwide Black Lives Matter protests were peaceful -- more than 96 percent involved no property damage or police injuries, according to The Washington Post, which also found that police officers or counterprotesters often instigated violence.

The conservative Tea Party protests featured zero percent violence, but that didn’t stop the Times from excoriating them as racist and dangerous.