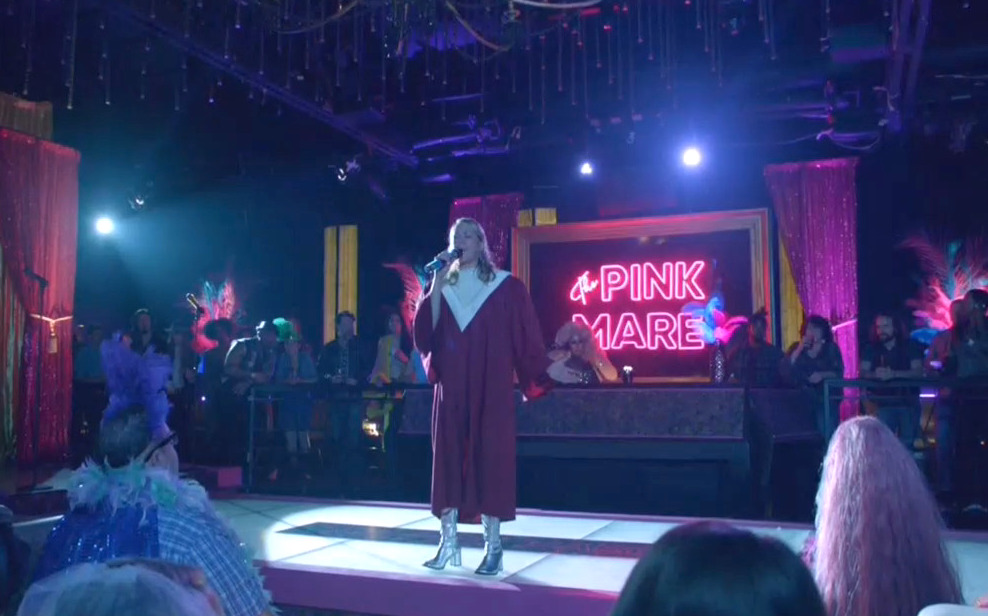 The NBC sitcom Perfect Harmony can be a charming show that often shows a positive, loving image of rural Christian churchgoers. While the show also goes off-key at times in its portrayal of rural Christians, it has steered clear of pushing contemporary sexual agendas.

This week's episode, "Regionals," on January 23, changed that by incorporating omnipresent drag culture with Christian prayer. The show ends with the church members singing the refrain "Ave Maria" on stage at a gay drag bar (the singers combine the hymn refrain with contemporary pop).

Reverend Jax: Because it doesn't matter where our choir gets to perform, just that we make music together. Also, the lighting is impeccable.

Arthur: You guys go ahead. You're better off without me.

Reverend Jax: Then just stay and listen. I know you're in pain. But I also know that music is your connection to what I call God. So shut up and notice the love all around you! And if you get a chance, order the huevos rancheros.

Ave Maria is the Latin prayer "Hail Mary," referencing the Gospel of Luke. As a drag queen recently pointed out in a viral YouTube video: “A drag queen performs in a nightclub for adults. There is a lot of filth that goes on, a lot of sexual stuff that goes on." It is common for gay culture to appropriate and also mock Christian, and specifically Catholic imagery, for their own purposes. Hollywood has shown greater interest as of late in trying to merge Christianity with open celebration of homosexuality and homosexual identitarianism.

This closing scene in a generally harmless network comedy is meant to show how open and tolerant the kind-hearted conservative church choir is. But why, exactly, must Christians openly celebrate drag culture in order to love gay or transgender individuals?

A closing scene in a cute network comedy may seem like small potatoes in the larger culture wars, but it is just another example of how far the Overton window has been pushed in American living rooms.