Netflix Dark Comedy ‘Dead to Me’ Recognizes Humanity of Preborn Child: ‘You Have a Life Inside You’ 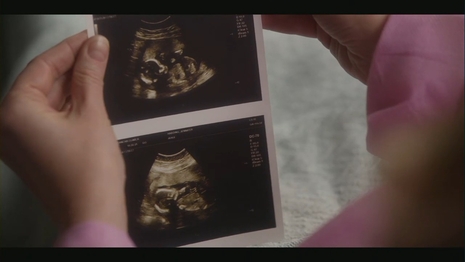 It’s not often that Hollywood acknowledges the value of preborn human life. In fact, it’s usually the opposite, especially since Roe v. Wade was overturned (which is no accident). So, it was a pleasant surprise when Netflix’s hit dark comedy Dead to Me showed reverence and respect for the unborn baby main character Jen (Christina Applegate) is carrying during the show’s third and final season, referring to the baby as a “human being" and “a life.”

It was also nice to see Hollywood prove that a single mother who finds herself facing a crisis pregnancy during a very difficult time can absolutely choose life for her child and still be successful and happy. Jen is menopausal and widowed with two sons at home when, in episode 7, “Can We Be Honest,” her doctor surprises her with the news that she’s pregnant from a one-night stand. This happens right after finding out her best friend Judy (Linda Cardellini) has stage IV cervical cancer.

“How is this even possible?” Jen asks. “I am a thousand years old.”

When the doctor asks if she’d like to know the sex, Jen retorts, “I would like to go back in time and not have the sеx.”

Her doctor gently reminds her, “Jen, I understand this is a shock, but it's also kind of a miracle. Do you know how many women would kill to get pregnant at your age?”

Jen immediately thinks of Judy and how much she’s always wanted to be a mother, but due to her cancer, she’ll never be able to live out that dream. Still, Jen manages to quip sarcastically to the doctor when she asks if she has a partner, “Don't say partner. I'm not running a small business. I have a f*cking human being in my body.”

The news about the baby hits Judy hard, but she keeps her pain to herself not wanting to burden Jen with it.

In the final episode, “We’ve Reached the End,” the two are temporarily hiding out from the law together on a girls getaway in Mexico. Jen wants to stay there until Judy passes from the cancer, but Judy won’t hear of it, leading to a conversation and scare that again displays the value of a preborn child:

Judy: You promise me. Don't let that baby grow up without knowing its father. Trust me. It creates a hole in your heart that...

Judy: No, he said that you have something called placenta previa, and that's the cause of the bleeding.

Jen: Okay, well, what does that mean?

Jen: What? What did he say? Is there something wrong with the baby?

Jen: All right, I'm not gonna say I wasn't hoping for a girl 'cause I don't even know what I was hoping for. And I mean, you know how gender is just so loosey-goosey these days.

Jen: But damn, was I hoping for a girl.

Jen: But girls are better, obviously!

As someone who dealt with secondary infertility due to endometriosis and who finally conceived a miracle baby after brutal surgery and drug therapy for my disease, only to experience the same issue with placenta previa, this scene really hit home for me.

Thankfully, my beautiful baby boy was born despite it all, albeit after an emergency induction due to preeclampsia, a life-threatening complication. My son’s oxygen level kept falling during labor as well, due to the cord being wrapped around his neck, which my doctor swiftly removed as soon as his head and neck were exposed. Praise God the baby and I were both okay.

All these complications, however, make you extremely grateful for the life that’s growing inside of you even more than you ever thought possible, especially when you finally get to hold that precious baby in your arms. Kudos to this show for capturing that emotion perfectly and for recognizing the value of preborn human life!