Speak for Yourselves! Hulu’s ‘Dollface’ Claims ‘All Chicks are Obsessed with AOC’ 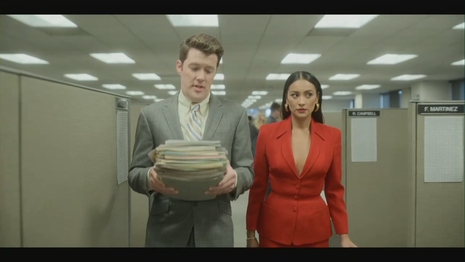 When it comes to vanity, we all know socialist Rep. Alexandria Ocasio-Cortez (D-N.Y.) is an expert and doesn’t need anyone’s help to boost her ample self-esteem. Hulu’s streaming comedy Dollface, however, still felt the need to make her head swell even further by claiming that “all chicks are obsessed with (her).”

But it appears to be a classic case of projection, as the show’s writers have an obvious obsession themselves for liberal feminists in general. They name-dropped several prominent women on the left, but there was no love for conservative women, of course. That comes as no surprise, given that last season they referred to Women’s March counter-protestors as, “sexist(s)”, “bigots,” and “Nazis.”

Dollface focuses on a four-girl friend group led by main character Jules (Kat Denning). In the current season’s second episode, “Right-Hand Woman,” Jules’ friend Stella (Shay Mitchell) is interning at a bank and overhears sexist remarks from two coworkers in the cubicle next to her. Both are typical white, male, misogynist caricatures who dish out an underhanded compliment for AOC, a scene which is proudly featured on the show's Twitter page:

Man #1: This is the CA for all of VQBC's private COs internationally. They wanna see basis points and ETFs for all 219.

Stella: So basically, they want a P/E ratio for the blue chips in European and Asian markets.

Man #1: By tomorrow. That intern life. Sorry, not sorry.

Man #1: Dude, I just dropped a load of work on the new intern's desk.

Man #2: That's the only load you're gonna drop on her.

Man #1: She kinda does look like that stripper we met in Vegas, right?

Stella: Actually, it's more her taking-no-shit than the style-inspo for me. But thank you so much for noticing. Oh, and could you boys keep it down? Some of us are working. Sorry. Not sorry.

I mean, this show does feature a talking cat and bizarre dream sequences, so maybe this claim was supposed to be part of that alternate reality, because it’s a pretty safe bet that a vast majority of women in the real world aren’t sitting around thinking about the self-obsessed politician all day and night.

Unless maybe they’re writers on a show called Dollface, who are playing the ‘80s hit song Obsession in the writers’ room (or maybe Mariah Carey’s Obsessed if they’re millennials) while thinking of all the ways they can glorify the many liberal feminists they’re obsessed with.

Take episode three, “Boss Lady,” for example, in which Stella and new character Liv (Lilly Singh) are renovating a bar that Liv’s dad left to her. The renovation soon turns into a liberal feminist’s dream scene as the two discuss “taking down the patriarchy,” and gush over RBG and Gloria Steinem, all which has an aphrodisiacal effect on them:

Stella: This is it. Say goodbye to your dad's bar.

Stella: I mean, you're literally taking down the patriarchy and putting up a bar for women.

Liv: Yeah. We're like Gloria Steinem and Ruth Bader Ginsburg, fighting for a woman's right to drink too much rosé.

Stella: And only one bathroom in a bar for women? Not on our watch. This place is gonna be full of toilets.

Liv: Totally. Maybe we don't lead with that marketing-wise though.

Liv: This is way better than therapy! Okay, let's stop for a sec.

Stella: Your dad must've really been an asshole.

In episode six, “Space Cadet,” the writers got a little more creative with the name-dropping, as Jules visits an art exhibit. The host tells her, “It's a pop-up installation created by a meditation app and CAMLA.”

“Kamala...Harris,” Jules asks. “The vice president? I guess she seems like she meditates.”

“Yeah, she does, actually,” the host replies, “but CAMLA as in the Contemporary Art Museum of Los Angeles.”

To borrow from the first clip, it’s like, yeah. All Dollface writers are obsessed with liberal chicks. We get it. Sorry, not sorry.